Wednesday is D-Day, PLB playoffs down to the wire 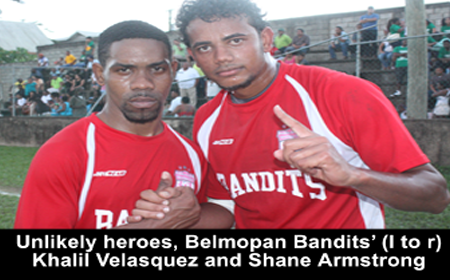 BELIZE CITY–What a game! What a season! What a playoff in this Premier League of Belize (PLB) 2014-2015 Opening Season! The 4 teams who made the playoffs were not decided until the last weekend of regular season football; and these playoffs, which will end this Wednesday night, are in a similar position. BDF is out of the race, but they can still be a spoiler for Verdes. None of the 3 teams battling for the 2 spots in the championship finals – neither Belmopan Bandits, Police United nor Verdes FC is sure of a spot in the finals. There are a host of mathematical possibilities. Of course, Verdes could take BDF lightly, and that would send Police and Verdes to the big dance, whatever the outcome of their game. But if Verdes beats BDF, then Verdes is home free, and Police would need a win against Bandits, because a draw would send the Bandits through. (See the latest standings below.)

Going by our unofficial reports, in games at 4:00 p.m. on New Year’s eve last Wednesday, December 31, the People’s Stadium in Orange Walk saw Belmopan Bandits with a 1-0 win over BDF; while at the Norman Broaster Stadium in San Ignacio, Verdes followed their Saturday night 1-0 win over Police United with a 4-0 blowout of the law men on Sunday afternoon. Police was obviously weakened by the loss of their sweeper, Frank Lopez, who was red carded on Saturday night, and thus had to sit out the Sunday game.

But on a rainy Saturday night, January 3, at the Isidoro Beaton Stadium in Belmopan, Police United rebounded from consecutive defeats to Verdes (1-0 and 4-0) to gain a hard earned 2-1 win over a game Belize Defence Force FC. According to our unofficial reports, Amin “Tacos” August, Jr. gave Police the lead early in first half, but late in second half BDF equalized. Coming up big near the end for Police was their recently returned top striker Clifton West, whose goal gave Police the critical 2-1 victory which kept their championship hopes alive.

Then yesterday, Sunday, under bright sunshine at the Norman Broaster Stadium in San Ignacio, there were enough thrills at both ends, with Bandits’ goalie Woodrow West making two spectacular first half saves at the southern end that kept Verdes off the scoreboard. Cheety Jimenez’ right foot blast from point blank range forced West to rely on his reflexes and he just managed to tip the ball over the crossbar; and Bredda Thurton’s powerful leaping header from the penalty spot seemed destined for the left “pigeon hole;” but somehow a diving West got a hand up there in the nick of time to also send it over the top. As regulation time elapsed, it seemed that Verdes would secure a spot in the finals with a draw; but in a long injury time, caused by Verdes goalie Benito Moreira’s repeated delays of game (for which he received a yellow card from referee Irfan Basdemir), Bandits’ Khalil Velasquez sent a long curving corner kick from the left side, and it went all the way towards the right side of the Verdes “box” where Bandits very tall defender Shane Armstrong had joined the attack, and he jumped high above the smaller Verdes defenders to send his header past a bewildered Moreira. 1-nil, Belmopan Bandits, and the long whistle came 3 minutes later.

Wednesday is D-Day for 3 teams – Belmopan Bandits, Police United and Verdes FC. Only 2 will make it to the home-and-away championship finals, which begin right away this coming weekend.