Home Headline Did wrong diagnosis cause death of 19-year-old?
HeadlineHealth

Did wrong diagnosis cause death of 19-year-old? 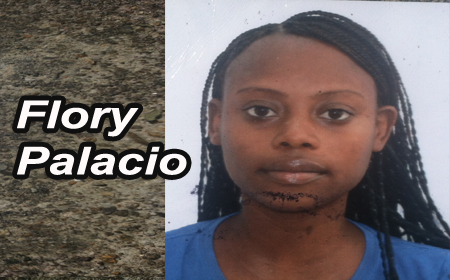 BELIZE CITY–A 19-year-old 4th form student of Gwen Lizarraga High School, Flory Palacio, died in September, allegedly after her medical condition was misdiagnosed as tuberculosis. Juanita Paulino, Flory’s mother, said that after Flory died, they received a death certificate which indicated that she had actually died from Hodgkin’s Lymphoma – which is a rare type of cancer which originates from the white blood cells, or lymphocytes.

We met Paulino and a very dear friend and supporter of hers, Nzinga Barkley-Waite, protesting in front of the Karl Heusner Memorial Hospital (KHMH) for a second day today, because the hospital has still not met the family’s demand for her medical records.

The family told us that when the hospital produced the girl’s medical file, all her records since July 2014 were missing from the file.

“It is the family’s legal right to a copy of the file, so why am I being pushed around?” said Barkley-Waite, who Paulino has authorized to obtain the KHMH records on her behalf.

While the family was protesting in front of the KHMH, they received a phone call from Paulino’s home saying that a letter had arrived from the KHMH. They sent for the letter to see its contents.

Meanwhile, Dr. Adrian Coye, the recently appointed chief executive officer of the KHMH, approached Barkley-Waite, asking her to come out of the sun and into the building because he did not want her to get sick. Barkley-Waite said that she would not, because she would wait to see what Coye had written in the letter to the family.

We took this opportunity to speak with Coye, who told us that he would speak with us but asked that we not record the conversation. Coye told us that there are instances where tuberculosis masks itself as cancer. He said that Palacio was diagnosed with TB by the hospital.

Barkley-Waite told us that the reverse is true – that the cancer is often misdiagnosed as TB, which is what the family contends happened in Flory’s case.

According to the family, Flory was not diagnosed with Hodgkin’s lymphoma (also written “Hodgkin Lymphoma”) until the post-mortem was conducted by Dr. Hugh Sanchez.
We did some online research and typed three words: “lymphoma, TB, misdiagnosis”. The Google search results led us to information supporting Barkley-Waite’s claim.

That article highlighted the case of a 28-year-old male with pulmonary Hodgkin’s Lymphoma, which, it said, was first misdiagnosed as pulmonary tuberculosis. However, a subsequent lung biopsy confirmed that the man had pulmonary Hodgkin disease.

“Given its clinical similarities to tuberculosis (TB), lymphoma may be misdiagnosed,” said a 2013 article in the South African medical journal captioned “Misdiagnosis of tuberculosis in patients with lymphoma,” by Bhamini Puvaneswaran and Bonga Shoba.

It added that, “Delay in diagnosing lymphoma or its misdiagnosis is an important clinical problem in South Africa, with the condition often misdiagnosed as TB. This subjects patients to incorrect treatment and potential harm.”

Paulino recounted Flory’s plight for the six months prior to her death.

“Six months ago, she started feeling ill with a cold, which she has experienced off and on since she was a child,” the mother recounted.

Paulino said that she sent Flory, who is the first of her four children, to see a doctor and she was given cold and cough medications. Since her condition was not improving, her mother took her back to the doctor and told him that it was not natural for her to have been having this cold on a frequent basis since she was born.

The doctor said Flory’s chest was clear and ordered an x-ray, which was done at the Belize Medical Associates (BMA). The BMA recommended that she go to see a doctor right away, because the x-ray result did not look good, the mother recalled.

The medics told the mother that her daughter had lymphomas and described their features.

Paulino said that she texted Barkley-Waite, who told her to go to the hospital so that a specialist could see Flory. Derek Aikman, a former parliamentarian, made the connection for her to see Dr. Adrian Coye, at the time a noted chest doctor and surgeon at the KHMH, who then said that a biopsy had to be done to determine the stage of the lymphoma.

“When they did [the] biopsy, Coye said it was TB, not cancer,” the mother said.

By this time, even though Flory was not hospitalized, she had to quit school because she was getting very weak.

“They said, ‘She won’t die. She will get better. TB doesn’t kill anybody anyway,’” Paulino recalled.

With Coye’s diagnosis that Flory Palacio had been suffering from TB and not lymphoma, the family was sent over to the Cleopatra White clinic, to the chest facility, for treatment. She was also seen by Dr. Pedro Arriaga at the KHMH.

However, Paulino said that the personnel there were reluctant to treat Flory without documentation confirming that the teenager, who had been vaccinated for TB as a child, had TB.

Today, Coye told us that they had determined via tests that Flory had TB, and he said that it is not impossible for TB to “masquerade” as lymphoma – which he said appeared to have been the case with Flory. Coye told us that he had actually performed surgery on a man who had a huge mass in his chest which was actually a complication from TB. Coye said that he had operated on the patient a few years ago and he is still alive today.

According to Paulino, the Cleopatra White clinic, via its chest facility, gave Flory 12 pills which she had to take every day, but her condition actually worsened.

“I was scared to see her getting worse,” said the mother, who reported that there was a “bubbling sound” when Flory breathed, and skipped heartbeats. The teenager hardly had strength to stand up, she noted.

“It was very hard — very hard,” Paulino said, adding that “I didn’t realize my daughter lost so much weight. I got very scared.”

She said that she ensured that Flory took her medication, provided free at the chest clinic, every day.

The mother said that at one point, she also did not believe Flory was terminally ill.

“At one point, a nurse said she was playing on my emotions,” said Paulino, who said that she started scolding her daughter and told her to get up and get her own water, but she noticed that Flory struggled to walk, and had to hold on to furniture to get to where she wanted to go.

“It was a Sunday, five days before she died, I told her, ‘Flory, you don’t look good, ma. And I don’t have any money so what I will do is to call the ambulance for you,’” the mother recounted.

The ambulance came and they attempted to insert intravenous drips in Flory, but could not find her veins.

“We came here and they started treating her for TB. I remember a nurse telling me… She said, ‘We still have not found TB – but TB hides’,” Paulino continued.

According to Paulino, the KHMH never did find evidence of TB.

“Unless, they are manufacturing now some results that say TB, that’s the only way,” Barkley-Waite added.

Barkley-Waite met with the hospital last week demanding Flory’s full medical records, but up to today, the family had still not received those records.

Coye told us that he has three people looking for the documents and he hopes that they are found.

She was laid to rest two weeks after that, the mother recalled.

“We have not been able to get the medical records, which we want. We want to see that proof that that child had TB. We just want this to lay to rest,” Paulino urged.

Paulino and Waite say that they intend to continue to agitate until they get Flory’s medical records from the KHMH.

Today, the family met with Coye, and after claims from the hospital that records could not be released to Barkley-Waight, because a proper document giving her power of attorney had not been given to the KHMH, the mother presented a hand-written note to the hospital restating the demand.

Barkley-Waite said, “They are insulting our intelligence, because Coye said I could get [Flory’s medical records].”