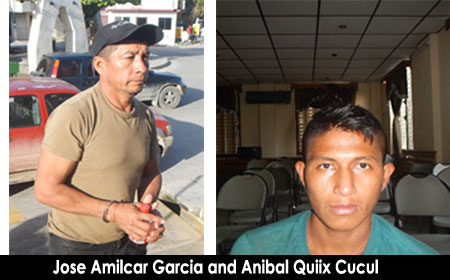 SAN JOSE SUCCOTZ, Cayo District, Wed. Dec. 7, 2016–Two Guatemalans were recently detained while panning for gold in the Ceibo Grande Creek area, located in southern Chiquibul National Park, 9 kilometers away from Belize’s western border with Guatemala; but reports from Friends for Conservation and Development (FCD) indicate that the total number of Guatemalans panning for gold inside Belize is now at an estimated 100, after what appeared to have been a cooling off period.

FCD’s Executive Director, Rafael Manzanero, told Amandala that in addition to the apparent uptick in illegal gold panning, chainsaws were recently heard on at least two occasions at the adjacent protected area, the Caracol Archaeological Reserve—which was the first evidence of illegal logging in the area since the murder of Special Constable Danny Conorquie by Guatemalan loggers in September 2014. No one was arrested in those illegal logging incidents.

Another concern in the area is illegal clearings for milpa farming—which tends to increase during the dry season and especially during the months of December to February.

The Guatemalans who venture into the protected areas to farm, clear logs and pan for gold tend to move back and forth across the porous border, mostly without detection, but on November 25, a joint patrol comprised of Belize police, Belize Defence Force soldiers and FCD park rangers detained two Guatemalans who were found panning for gold: Anibal Quiix Cucul of Monte Los Olivos, Peten, and Jose Amilcar Garcia Morales of Huite, Zacapa, Guatemala.

According to FCD, Anibal, who was found with a vial that appeared to contain gold nuggets, said that he had come illegally into Chiquibul 7 times to pan for gold, and the last time he came he had collected some 2.5 grams of gold which earned him 500 quetzales (or roughly BZ$130) in the village of Monte Los Olivos, the village from which the gold panners mostly come.

“The community of Monte Los Olivos remains the key community that buys the gold from gold panners, and it is believed that some 100 persons from Monte Los Olivos and other villages such as Los Limones and Brisas de Chiquibul are actively extracting gold,” FCD reported.

The illegal panning for gold is a risk to the health of the waterways. FCD notes that since 2012, there have been heavy sedimentation streams on the upper limits of the Maya Mountain Main Divide, where Guatemalans continue to pan for gold.