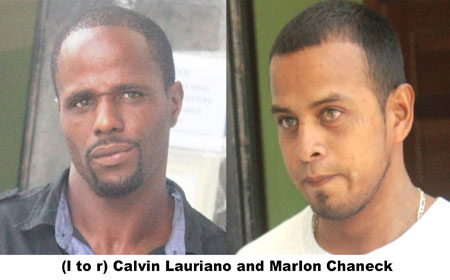 BELIZE CITY, Thurs. Sept. 22, 2016–Two men, one from Belize City and the other from Cayo, were sentenced to three years in prison and fined the minimum $10,000 fine for the offense of drug trafficking. If they default on paying the fine, they will have to serve an additional three years behind bars.

The two were convicted of trafficking 148 pounds of cannabis when their case concluded before Magistrate Deborah Rogers, after several months of being before the court.

Magistrate Rogers explained in her ruling that she found the men guilty after carefully dissecting the evidence the prosecution brought against them.

On June 17, 2015, four persons were inside a car in which there were two suitcases of cannabis.

The car was being driven by Calvin Lauriano, 39, and his passengers were Marlon Chaneck, a resident of Santa Elena Town, Cayo District; Eve Beeks, 20, a resident of Tranquil Lane, Belize City; and her friend, Dawn Parchue, 21, also of a Belize City address. All four were arrested and charged with drug trafficking.

In a no-case-to-answer submission, however, Senior Counsel Ellis Arnold was able to convince Magistrate Rogers that the two women did not have any knowledge about the drugs police found in the car, and Beeks and Parchue were acquitted of the charge.

In summarizing the evidence that court prosecutor, Corporal Christopher Smith, presented to the court, Magistrate Rogers explained that she found it strange that the men had claimed that they had no knowledge of the cannabis inside the car when the smell coming from the cannabis was so overpowering.

The driver of the car, Lauriano, told the court that he had just picked up Chaneck, who was hitch-hiking, and that he did not know him or what he had in the two suitcases that he brought with him into the vehicle.

Chaneck, for his part, testified that he had only gotten a ride and was seated in the back seat of the car.

His evidence, however, was contradicted by police, who told the court that when they stopped the vehicle at the police checkpoint in La Democracia, on the George Price Highway, Chaneck was seated in the front passenger seat.

Both men claimed that the cannabis belonged to the other. Magistrate Rogers was not convinced by either version of who actually owned the cannabis, and as a result, she found them both guilty of drug trafficking.

The amount of cannabis of which the two men were convicted of being in possession was so substantial that the magistrate could not use her discretion and just impose a fine for the two first-time offenders.

They were both sentenced to serve three years in prison and ordered to pay $10,000 plus $5 cost of court.

Both men just sat in their seats and appeared shocked when they heard the verdict and the sentence was handed down.

During the trial, both Lauriano and Chaneck were unrepresented by an attorney.

Beeks and Parchue were freed today from the drug trafficking charge based on the no- case-to-answer submission that their attorney, Arnold, made on Thursday, August 18.

Today, after the two men were found guilty, before they left the courtroom, prosecutor Smith made an application for the red Jeep Cherokee, the vehicle in which the cannabis was found, to be forfeited to the Government of Belize.