14 Benqueños dragged to court for “rioting” 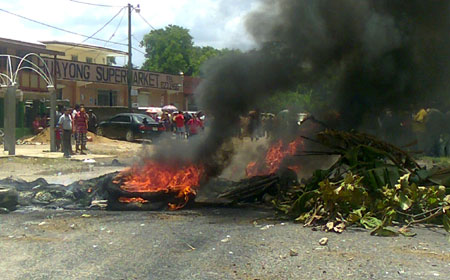 BENQUE VIEJO–Earlier this week, twenty residents of San Jose Succotz and Benque Viejo were summoned to court following a show of civil disobedience that unfolded on August 19, 2014 when a mob of villagers blocked the junction of the San Jose Succotz and Benque Viejo road for over 7 hours with burnt tires and, at the height of the protest, threw missiles at police who were trying to dismantle the standoff and open the road.

They were all supposed to be arraigned in the Benque Viejo Magistrate’s Court today; however, only 14 of them answered to the charges before Magistrate Herbert Panton after two had their charges withdrawn and four others did not show up because we understand that they were not properly served with the summons by police.

The 14 persons were arraigned for “rioting” and “unlawful assembly” for their involvement in a memorable all-day unrest (which erupted after a car collision involving Deputy Commissioner of Police Miguel Segura that resulted in the death of a woman and the injury of a taxi driver), which effectively closed down the George Price Highway between Miles 72 and 73 three months ago.

When the session commenced at around 10:30 a.m., all the accused pleaded not guilty to both charges, and were given bail of $300 each, plus one surety of the same amount under the condition that they must not participate in any riotous behavior or illegal assemblies while on bail.

The prosecution then requested for the trial date to be set for February 12, 2015.

After the proceedings, their attorney, Michel Chebat, told the media that he believes that his clients are being victimized.

Roselia Cu, the wife of Yanie Cu, the taxi driver who was transporting Yolanda Valencia to San Ignacio on the day of the fatal accident, expressed that she is deeply gratified for the demonstrators, who not only stood up for them, but fed her family and took care of her children during their time of difficulty.

“We are a people united, who suffers the pain of other people”, she affirmed.

Meanwhile, Western Regional Police Commander, ACP Aaron Guzman, explained that they are relying on photographs taken on the day of the upheaval as evidence against the villagers.

“A decision was made that day to take photographs of those persons that were out there acting unlawfully and as a result, summons were prepared and served on these people, and that is why they appeared in court. It may be that we don’t have photographs of other persons [who took part in the protest], so we are only able to summons those persons that we have photos of and information on”, he mentioned.

That means that no one else is expected to be charged, and while he admitted that mistakes may have been made in gathering their evidence, Guzman maintained that they are simply doing their duties as law enforcers to bring charges in light of the volatile situation that erupted back in August.

“Right now, we think those are the persons that will be charged. I don’t, at this time, foresee anyone else being summoned. We had certain things in place, and we if made some mistakes, in that we did not capture every person that was involved, then it so happens that we have to correct those mistakes so that, in the future, we try to capture everybody that gets involved in an incident of this nature”, he cited.

We understand that disclosure to the 14 persons arraigned today must be provided on or before December 31, 2014.

The apparent injustice that prompted the crowd of nearly 400 Succotz and Benque residents to engage in acts of civil disobedience was what appeared to them to be inaction on the part of the police to indict their own, Deputy Commissioner Miguel Segura, who had caused the death of Yolanda Consuelo Valencia, 54, and left her taxi driver, Yanie Cu, 28, seriously injured.

ACP Segura was proven to have been driving under the influence of alcohol on August 16 when he crashed into a taxi which was heading to San Ignacio Town and killed Valencia, a market vendor, who was the passenger, and consequently sidelined the driver, Yanie Cu, who is still slowly recovering from the injuries he sustained.

Segura is facing charges of manslaughter by negligence, causing death by careless conduct, driving without due care and attention, negligent grievous harm, failing to alter the direction of his vehicle to give way, and driving a motor vehicle with an alcohol concentration above the prescribed limit.