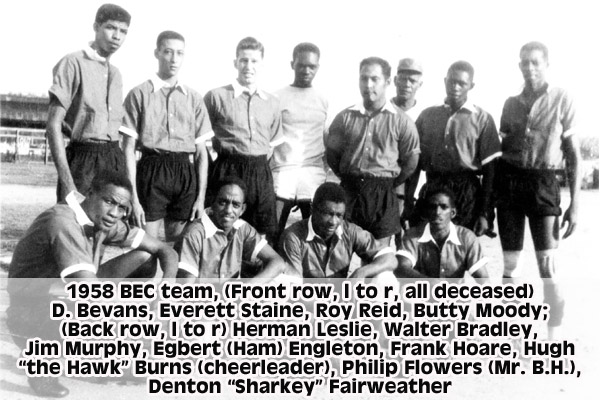 Belizean elder Walter Bradley dropped by our sports desk this morning to provide the above picture and information for our sports fans.

As “cheerleader” for the BEC team, Hugh “the Hawk” Burns, who at the time conducted his “mule and cart” transportation service from the BEC lumber yard (presently the site of The Tavern at the end of North Front Street) to any place required in Belize City, was extremely vocal at football games when his BEC team was playing. Sometime after the U.S. – Cuban missile crisis of 1962, the Hawk began calling his BEC team “the Missiles.” Already possessing a natural booming voice (which also made him a favorite at “wakes” in the City), the Hawk at one time increased his volume further for a big game at the MCC with the aid of a megaphone, cheering on his “intercontinental, ballistic Missiles.”

The 1958 BEC team was not the champion; according to Mr. Bradley, they placed 3rd or 4th in that season. (Dunlop was the 1958-59 champion.) However, the team was strengthened over the next couple years with additions from the “broken up” former champions, Dunlop; and thus began the 1960’s BEC dynasty with “Pine,” “Chico” and others.