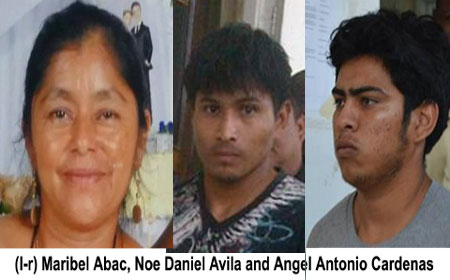 ORANGE WALK, Wed. Feb. 4, 2015–Murder charges have finally been brought against two men who reportedly led authorities to a well off the Honey Camp Road on the outskirts of Orange Walk Town, where the decomposing, mutilated body of Sonia Maribel Abac, 46, a masseuse from Orange Walk Town, was found in mid-July 2014.

The two alleged murderers – Guatemalan national Noe Daniel Avila, 22, and Angel Antonio Cardenas, 19, of Trial Farm Village, Orange Walk – were brought from the Belize Central Prison, where they are currently remanded for another high-profile murder and marched into the Orange Walk Magistrate’s Court today to be arraigned for Abac’s brutal death.

No plea was taken after the duo, were read their charges and the case has been adjourned until March 31, 2015.

Abac was reported missing on April 23, 2014, and reliable sources had indicated at the time that the masseuse was last seen at the home of Manuel “El Pelon” Castillo, 37.

Castillo, an Orange Walk native who had been deported from the United States twice within a 3-year span, factors into the equation because authorities have pinpointed him as one of the chief conspirators behind the murders of both Abac and well-known Orange Walk businessman and former mayor, Ramón “Don Ramon” Cervantes, Sr., 71, whose tortured body was discovered in a shallow grave off the Honey Camp Road five days after being abducted from his cane field on the Mameyal Road in Orange Walk on July 1, 2014.

Less than a week later, a forensic team of investigators – equipped with a small excavator – hoisted the remains of Abac from an abandoned 16-foot well which was located no more than 200 feet from where Cervantes, Sr.’s body was discovered, albeit in another property.

Police said that her feet, hands and head were all found in different parts of the well and that she was identified by her personal belongings which were buried with her, such as her purse, her shoe, her cell phone and also because she was dressed in the same clothing that she was wearing the last time she was seen alive.

Police also confirmed at the time that two of the three men who had been charged for killing Cervantes, Sr., took them to the site where Abac’s body was dumped and for that reason, the family of Abac – who is originally from Guatemala – had since been clamoring for closure in their loved one’s death.

After seven months of investigations, her accused killers have finally faced charges; however, the circumstances surrounding the deaths of Cervantes, Sr. and Abac – which are believed to be somehow connected – remain a mystery.

Of note is that police have confirmed that Mateo Pott, Jr., 28, of Trial Farm in Orange Walk, who was also charged with the kidnapping and murder of Cervantes, Sr., has not been charged for the Sonia Abac murder.

In the meantime, the accused ringleader, Manuel Castillo, who is presently wanted for questioning by the authorities, is still on the run and is believed to have absconded to either Mexico or Guatemala.