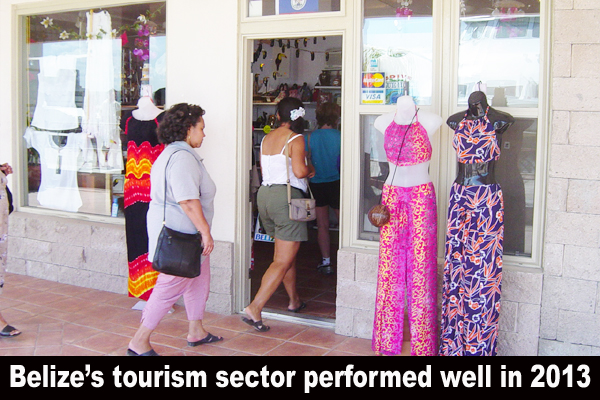 The country’s economy is expected to grow at a modest rate of 2% percent, according to Prime Minister Dean Barrow, Minister of Finance and Economic Development, who presented the latest economic review and projections in the National Assembly on Friday in the context of the budget presentation for the upcoming fiscal year, 2014-2015, which begins on April 1.

Barrow reported that Belize’s economy grew by 0.7% in 2013 – a deceleration of the 4.0% he reported for 2012, but said that the outlook for 2014 is “full of promise,” with the Central Bank projecting a GDP growth of 2% in 2014, as the primary sector returns to positive output, construction and tourism hold steady, and Government’s capital spending program expands.

In explaining the low GDP growth reported for 2013, Barrow said, “The slowdown emanated in part from the primary sector where unfavorable weather and diseases caused production of the major export crops – banana, sugarcane and citrus – to decrease”.

For 2014-2015, though, he said that grain production should see a considerable rebound during the year and output of the major export crops is also anticipated to rise.

“Following a record harvest in 2012, the banana crop returned to its customary output level, declining by 4.7 percent to 98,820 metric tons. Citrus deliveries fell by 29.9 percent due to citrus greening and unfavorable weather. Meanwhile, sugarcane deliveries declined by 21.9 percent as the start of the harvest was postponed from December to January 2014 due to excessive rains that damaged roads and crops in the field,” the Minister of Finance and Economic Development said.

He noted that the secondary sector also contracted in 2013 due to the concurrent decline in agro-manufacturing of sugar and citrus juices coupled with the continued slide in petroleum extraction.

This contrasted sharply with the performance of the services sector, which now accounts for approximately 58% of the economy and which, Barrow said, was the main engine of economic growth in 2013.

Barrow said that the services sector performed well in 2013, largely due to buoyancy in tourism and an uptick in government services. That buoyancy in tourism, he said, was supported by strategic marketing efforts and heightened publicity, as well as by improvements in the economies of Belize’s main source markets.

“Stay-over arrivals increased by 5.8 percent with visitors from the US and EU, Belize’s primary markets, up by 4.1 percent and 8.6 percent, respectively,” Barrow reported.

As for cruise ship disembarkations, those increased by 5.7% to 609,612 visitors. This outturn reverses the 11.9% contraction in cruise tourist arrivals reported in 2012.

“The growth momentum generated by the tourism industry rippled across the services sector and heightened activities in ‘Wholesale and Retail Trade,’ ‘Hotels and Restaurants’ and ‘Transport and Communication,’’” Barrow said.

In the regional context, Barrow said that Belize performed better than some of its Caribbean counterparts.

Citing the Caribbean Development Bank’s regional report of February 11, 2014, Barrow said that, “For 2013, tourism was down in the traditional powerhouses of the Bahamas, Barbados, Antigua and Barbuda, Grenada and St. Vincent and the Grenadines. In Belize it was up just under 6 percent in both the stay-over and cruise sectors.”

He noted that overall growth performance improved in both Trinidad and Tobago and in Belize.

“This is in sharp contrast to most of the rest of the Community where economic activity was flat or actually contracted. Examples are Barbados, Jamaica, St. Lucia, Antigua and the BVI. Average inflation in CARICOM was 2.5 percent while in Belize it is 0.5 percent,” Barrow said.

According to Barrow, the level of foreign reserves increased only in Belize, Trinidad and Tobago and the EC Currency Union, while they fell in the Bahamas, Barbados, Guyana, Haiti, Jamaica and Suriname.

He also said that there are massive public sector layoffs in Barbados and wage freezes in Jamaica, St. Lucia and Grenada as a consequence.

On the global landscape, world output grew by an estimated 3.0% in 2013 – which Barrow said was still well below the global economic potential.