2 kidnappers charged; two on the run 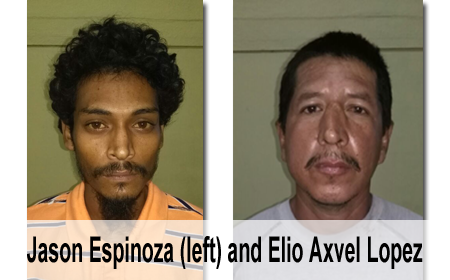 COROZAL TOWN, Mon. May 8, 2017–Two of four thieves who kidnapped and robbed three men in Ranchito, Corozal District, who were buying a car in Ranchito, have been arrested, and are in police custody pending arraignment in court.

The two robbers, identified as Elio Axvel Lopez, 40, of South Street, Corozal Town, and Jason Espinoza, 23, a laborer, also of Corozal Town, are accused of stealing $13,000 cash from their victims, along with other valuables, including jewelry and cell phones, valued at over $4,000, and also kidnapping the men, threatening to kill them later.

Police have charged the men with aggravated robbery with a firearm, kidnapping, unlawful imprisonment and abduction. Police also are seeking two more robbers involved in carrying out the crime — Jeffery Gongora and Brian Espinoza, both of Corozal Town.

Today, the two accused robbers in custody, Elio Axvel Lopez and Jason Espinosa, were taken to the Corozal Magistrate’s Court, where they were arraigned. No plea was taken from them, and no bail was offered. The men were remanded to the Belize Central Prison until August 8.

The incident occurred at about 4:00 Wednesday evening. Emil Javier Rosado, 23, a cane farmer of Ranchito; Eder Stevenson Hall, 26, a land consultant of Ramirez Layout; and Elizar Hall, 31, a cane farmer of Chan Chen, Corozal, told police that they went to buy a vehicle in Ranchito from Jeffery Gongora.

They were inspecting the vehicle when three men came out of the bushes wearing cloth on their faces. Two of them were armed with guns, and they held up Eder and Elizar Hall and Rosado and made them lie on the ground on their abdomens.

The men’s hands were tied behind their backs, and then they were robbed. The robbers told them that they would be taken to Libertad, where they would be killed and their bodies disposed of in the river.

Eder Hall told the media this morning that he had a small black purse, where he kept the cash to buy the vehicle. When the bandits saw the purse, one of them grabbed it, took out the money and threw the empty purse on the ground.

They didn’t search their pockets, and so he kept his wallet and phone. Hall said that when he was looking at them, one of the robbers told him “not to look at the boss.”

The robbers demanded that the three of them get in the trunk of the car that they came in, but only two of them could fit. So, he, Eder Hall, was put on the seat behind the driver and they put a bag over his head.

Hall said that he had a razor blade in his wallet, and when they were driving, he was able to take out his wallet and take out a razor blade and cut off the shoe strings with which they tied him, freeing his hands.

When the vehicle was nearing the Public Works Department in Calcutta, the trunk popped open, and Elizar Hall and Rosado, who had also been trying to escape and who had succeeded in freeing themselves from what had been used to tie them up, jumped out of the trunk onto the road, and ran.

The vehicle stopped and the driver got out to see what had happened, and Hall said that that was when he quickly took off the bag from his head and grabbed the gun from his captor, who was sitting beside him.

When he pulled the trigger to shoot his captor, however, the gun didn’t fire.

Hall said that when that was happening, the driver came back into the car because he didn’t know that he, Hall, had the gun.

When the gun didn’t fire, the driver’s partner opened the door and ran. The driver also ran.

Police said that Jeffery Gongora and his partner in crime, Brian Espinoza, were reportedly driving ahead of the car in a Nissan X Terra SUV, reportedly clearing the way for Lopez who was driving the car with the three victims.

The victims, who had now escaped from the car, called for police, who came immediately and searched the area. They saw the SUV and pursued it. The vehicle was later found abandoned at a farm near Camp 1 in Shipyard, Orange Walk District.

Brian Espinoza and Gongora, however, were nowhere to be found.  Police searched the vehicle and found a prohibited .45 Smith and Wesson pistol, model 457, along with a magazine containing three live rounds. They also discovered that the vehicle had been stolen from a woman in Orange Walk.

Police then went to Port Saul, in Corozal Town, where Jason Espinosa was found and arrested. Espinosa then took police to 2nd Street South, behind the home of Elvin Conorqui, 42, where Espinoza handed over a bag containing a gold chain and ring identified as items stolen from Eder Hall.

On Thursday, May 4, Elio Axvel Lopez was “reeled in”. He was found in Corozal Town, and when he was arrested, he handed over $6,500 to the police.

Police continue to investigate this vicious robbery and kidnapping.