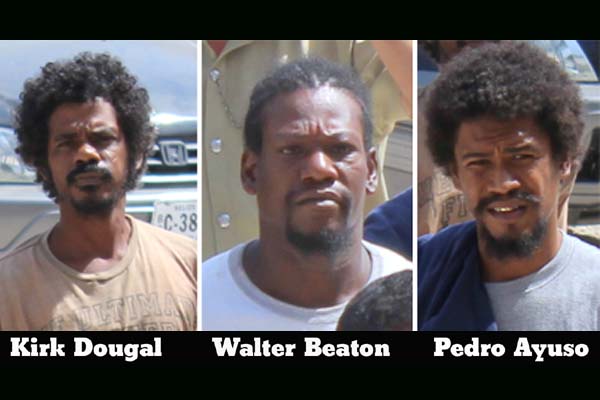 Police made a big bust when they intercepted a van at the checkpoint on the George Price Highway this past Saturday night. Inside the van at the time of the bust were Kirk Dougal, 36, a boat captain and fisherman of #29 Fabers Road; Walter Beaton, 29, a taxicab driver of #44 Dolphin Street; and Pedro Ayuso, 28, a fisherman and diver of #5 Linda Vista Street.

According to the police, at 8:40 Saturday night, a cream-colored van with three occupants approached the police checkpoint and the driver was asked to pull the vehicle over. When the vehicle was searched, a brown crocus sack was found on the back seat of the van.

Dougal, Beaton and Ayuso were unrepresented when they appeared before Senior Magistrate Sharon Fraser and pleaded not guilty to the charge. And while the men were offered bail, the Senior Magistrate explained to them that because of the alleged amount of suspected drugs that was found in their possession, the bail would have to be set high.

All three were offered bail of $15,000 each. Dougal, however, was found to owe the court a total of $1,360 from two previous drug-related charges dating back to 2003 and 2006. It was explained to Dougal that he would have to first pay his fines in full before he could be offered bail.

Dougal was able to pay off his outstanding fines and all three men were able to meet their bail. They are scheduled to appear back in court on June 28, 2013.