3 shutouts and a draw; 2 teams still undefeated at Week 8 of PLB Opening Season 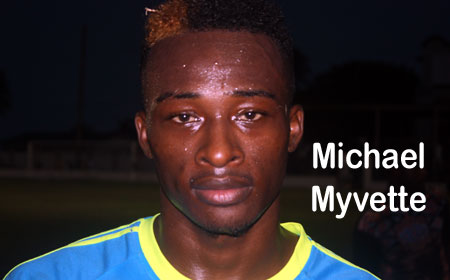 BELIZE CITY, Mon. Oct. 3, 2016–There were 3 shutouts over the weekend in Week 8 of the Premier League of Belize (PLB) Opening Season 2016-2017, and the other game was a 1-1 draw. When the dust settled, red cards and all, FC Belize is still undefeated, as is league leading and defending champion, Belmopan Bandits.

In the only Saturday night game this past weekend, it was home standing Belmopan Bandits with the 2-0 win over Verdes FC at the Isidoro Beaton Stadium, both goals coming from Brazilian striker Aloisio Teixiera (33’ & 71’ PK).

In one of the 3 games on Sunday, FC Belize came back from a 1-nil deficit to clinch the 1-1 draw with host BDF FC, despite FC Belize playing the last half hour a man short due to a red card ejection. A defensive error in clearing the ball gave BDF striker Michael Myvette a clear opportunity inside the FC Belize eighteen, and he promptly blasted it past FC Belize goalie Rodrigo Ibarra from close range at the 41st minute. But FC Belize, who suffered 2 red card ejections in their last outing, were gifted with a penalty early in second half, when BDF goalie Glenford Chimilio tackled Ryan Simpson hard on an air ball just inside the eighteen. Veteran striker Oliver Hendricks converted for FC Belize at the 55th minute, but less than 10 minutes later he was ejected for wrong choice of words to referee Juan Alas. Nevertheless, in a game that saw a number of near misses by both teams, FC Belize managed to hold on till the long whistle, and is thus still undefeated. (See standings below.)

In other Sunday games, Police United FC handed a 3-0 shutout to visiting Orange Walk FC at the Norman Broaster Stadium, with goals coming from Harrison “Cafu” Roches (43’), John King (67’) and Byron Chavez (90’). And at the Carl Ramos Stadium, it was home squad Wagiya FC with the 3-nil victory over Freedom Fighters FC from Punta Gorda, courtesy of a goal each from Ernest Flores (39’), Hector Gomez (52’) and Krisean Lopez (76’).

According to reports, there will be no PLB games this coming weekend, due to the International Friendly on Saturday between the Belize and Honduras National “A” Teams.

Up to press time, we have received nothing official, but sources are saying that the remaining PLB back match from Week 6, between BDF FC and Police United FC, should be played on Wednesday.

Whatever it is, for sure the race to the 4-team playoffs looks very interesting as the first round of regular season nears the end.