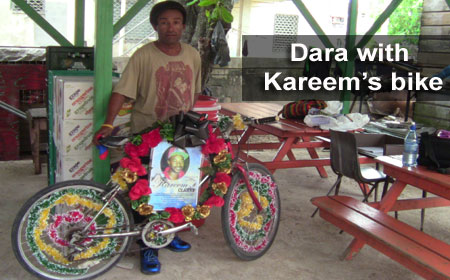 BELIZE CITY, Thurs. July 23, 2015–Joel “Dara” Robinson will host the 4th Annual Ride for Hunger this year, and as a special tribute to one of his regular patrons—Kareem Clarke, the Amandala reporter whose life was cut short earlier this month when he was callously gunned down on Vernon Street—the organizer has decorated Clarke’s bike, which will be placed on a float, as a memorial of his support for the cause to fight hunger among children.

Clarke was riding the bicycle when he was shot dead. Robinson has decorated it with wreaths and a laminated oversized photo of Clarke, as a tribute to a young man they will carry with them in spirit, when the Ride for Hunger makes its way from in front of the Smart headquarters, at 2 ½ Miles on the Philip Goldson Highway, at 6:30 a.m. this Sunday, July 26, 2015.

“A lot of people who have not experienced the ride want to try it,” said Dara, adding that more companies are also pledging their support.

“I feel that this year, the support will be better than other years, based on calls from the public,” he told us.

Participants are asked to make a contribution of only $10.00, the proceeds of which will go to Dara’s feeding program.

Robinson said that persons will be stationed at Smart from as early as 5:00 a.m. to receive donations of food items for the feeding program.

The route will take riders up the Philip Goldson Highway, and then left onto the Hattieville-Boom Road, to the George Price Highway, after which they will circle the city via Central American Boulevard and ride back to Smart. Water and drinks will be provided by service vehicles, Robinson said.

Other participants can join the ride along the way, and they are also encouraged to make their contributions towards the feeding program.

Last year, the ride netted roughly $1,700 after expenses were cleared, Robinson said. He told us, though, that even after the event was over, businesses and other supporters added their contributions to raise the total amount raised to roughly $2,500 – enough to cater to the 40 children in the feeding program for up to 2 months.

When we first visited the site of the feeding program a few years ago, the facilities were minimal – a picnic table on bare ground, under a shady spot in Robinson’s yard; today, though, we saw that there are several picnic tables on raised concrete flooring, all situated under a spacious open shed to provide more comfort for the children and to protect them from hot sun or rain while they eat. About 3 months ago, the Belize City Lions Club provided funds for the shed and Robinson and his friends teamed up to build it.

From the proceeds of this year’s ride, he hopes to be able to purchase some canvass for the sides of the shed, to keep out the rain, to install gutters for drainage, and to set up outdoor wash-hand basins for the children.