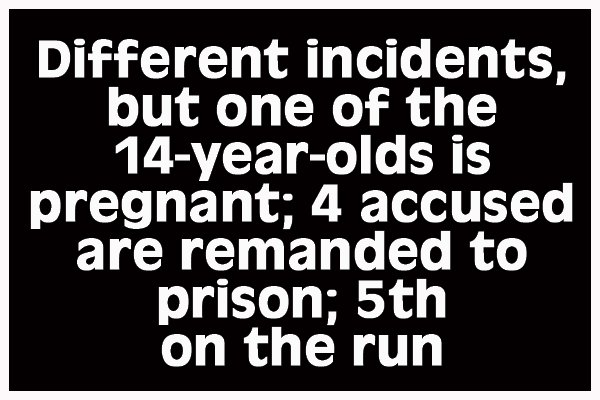 Four of five men who took sexual advantage of little girls have been charged with carnal knowledge and have been remanded to the Belize Central Prison. Two of the men are from Corozal: they are Lazaro Amaya, 60, a jeweler of a College Road address, and Aldo Alan Moreno, 34, of Paraiso Village.

Police said that Moreno impregnated a 14-year-old girl. The girl and her mother went to the Corozal Police Station and reported that Moreno took advantage of her many times over a four-month period, starting September of last year and continuing until as recent as last Thursday, January 24.

Police took her to a doctor at the Corozal Hospital, where, after she was examined, it was declared that she had been carnally known, and also, that she was three months pregnant.

Police immediately went to Moreno’s home and arrested and charged him with carnal knowledge of a child. He was taken to court, yesterday, Wednesday.

Also on Wednesday, Lazaro Amaya was taken to the Corozal Magistrate’s Court and remanded on similar charges, although his victims were even younger. Police said that Amaya took advantage of two little girls, ages 10 and 11, who are related.

The mother of the 11-year-old, who is also the grandmother of the 10-year-old, took the girls to the Corozal Police Station to report that sometime between January and July, 2011, Amaya took sexual advantage of the two children.

The irate mother/grandmother reported that Amaya took the two little girls several times during the 7-month period to the park in Corozal Town, and he would have sexual intercourse with her daughter, 11, in his van while her granddaughter and other relatives would be playing in the park.

On other visits to the park he would have sexual intercourse with the granddaughter. He would do this frequently, engaging the girls sexually by turn.

Police immediately took the girls to the Corozal Hospital, where doctors who examined them found that they had been carnally known. Police have since arrested and charged Amaya with carnal knowledge, and in the Corozal Magistrate’s Court today, he was remanded to prison.

In the old capital, Enfield Ervin Fitzgibbon, 23, has been remanded to the Belize Central Prison until March 20, on charges of carnal knowledge and indecent assault of a girl, 13.

Police contend in their press release of today, Thursday, that on the strength of a tip, about 9:00 a.m. on Tuesday, January 29, they went to a house on South Creek Road, where they discovered Fitzgibbon with the little girl.

The girl was taken to the Karl Heusner Memorial Hospital, where she was examined by a doctor, who certified that she had been carnally known. Fitzgibbon was immediately arrested and charged with carnal knowledge.

Police also reported in their press release of today that Ryan “Lippy” Alvarez, 22, of a Supaul Street address, has been arrested and charged with carnal knowledge, for taking advantage of the same 13-year-old female minor.

While in the store, the store owner struck up a conversation with her and took her into his bedroom and took advantage of her sexually.

When the ordeal was over, the girl went home and told her mother what had happened. After reporting to the police, the girl was taken to a doctor in Independence, who confirmed that she has been carnally known.

Police are searching for the shop’s proprietor, who has since fled the village.

The Domestic Violence Unit told Amandala today that it does not believe that there has been a sudden spike in the incidents of carnal knowledge, but simply that they have not gotten reports of the incidents for a long period until just recently.

The Sexual Crimes Unit of the Police Department also said that there is no increase, but most times when the girls are assaulted and taken advantage of, they do not tell their parents, but typically confide in their friends, and the friends later tell their parents, after much time has elapsed.