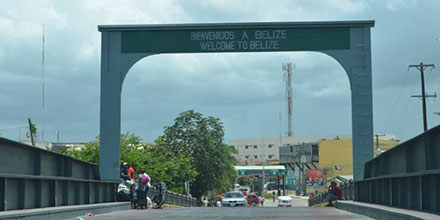 SANTA ELENA, Corozal District, Thurs. July 7, 2016–Back in February, Mexican protesters blocked access at the border with Belize over allegations of abuses carried out at their border checkpoints, and this week, another group—this time farmers—were threatening to mobilize 5,000 people for an extended blockage to demand that their government make good on the payment of funds to farmers.

Union Campesina Democratica’s (UCD) National Coordinator, Jose Duran Vera, issued a press release on Monday, July 4, 2016, announcing that today, Thursday, July 7, they would protest at the border Bridge of El Paso Texas, at some roads and railroad tracks on northern Mexico, the border with Guatemala in Tapachula, Chiapas, and at Mexico’s border with Belize, in Chetumal, Quintana Roo.

The protest over the payment of arrears to farmers, reportedly 5 million pesos (more than half-a-million Belize dollars), was to begin at 9:00 this morning, with the blocking of the two bridges which connect Chetumal to Belize. However, official sources from Mexico told us that there is no such blockade in Chetumal, and Belize Immigration sources told us that there has been no change in traffic flowing between Belize and Mexico at the border post, located in Santa Elena, Corozal.

Our Mexican source indicates that this could be a signal that the parties are trying to resolve the dispute.

The parties were reportedly in talks last month, when it was said that they were negotiating agreements to address the demands of farmers, including a diesel subsidy and support for livestock development. 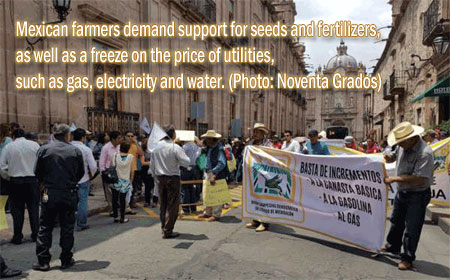 UCD said that they had begun protests on Monday in the city of Tuxtla Gutierrez, Chiapas, involving 3,000 farmers from Los Altos. The group had said that there was little progress by agricultural authorities in addressing their concerns.

The group, which has expressed concerns about the impact of announced budget cuts, is complaining of delays in the contributions of the Secretariat of Agriculture, Livestock, Rural Development, Fisheries and Food (Secretaría de Agricultura, Ganadería, Desarrollo Rural, Pesca y Alimentación or SAGARPA).

A Mexican news source, Noventa Grados, reported yesterday that about 150 people with banners and placards were protesting in front of a government office in Michoacan state in western Mexico, for support for seeds and fertilizers, as well as a freeze on the price of utilities, such as gas, electricity and water.