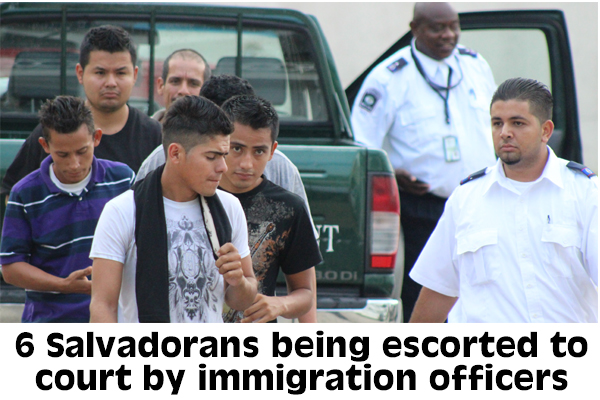 Six Salvadoran men who were picked up by immigration officers on Sunday, February 9, after they entered Belize illegally, were arraigned before Magistrate Leslie Hamilton late Monday evening. They all pleaded guilty to the immigration charge of illegal entry.

Hamilton imposed the mandatory fine of $1,000 each, payable forthwith, in default of which the men will each have to serve six months in prison. He also signed a removal order for them to be deported back to their native Salvador, after they either pay the court fine or serve time in prison.

A 29-year-old Belizean man who had initially been detained by police pending the outcome of their investigation of his connection with the six men, was released late Monday evening without being charged.

Two of the Salvadoran men were caught in his presence when immigration officers made the bust. All six of the men, however, denied knowing the Belizean man.

On Sunday, immigration officers were tipped off that there were some suspicious-looking individuals who had just gotten off a Novelo’s bus in Belize City. The bus had come into the city from Cayo.

Immigration officers intercepted four Salvadoran men in the vicinity of the bus terminal on Collet Canal. Additional intelligence led the officers to the Pallotti bus stop on the Philip Goldson Highway, where two more men were taken into immigration custody.

In their interviews with immigration officers, the men said that they were going to Carmelita, in the Orange Walk District, to do some chopping work. When their identification documents were examined, however, none of them had a passport. They only had identification cards.

Immigration officers suspected that the Belizean man that police had detained had something to do with smuggling the men into Belize via the Mopan River, but their suspicion did not pan out because there was nothing to link the man with an illegal smuggling ring, and all the Salvadorans denied even knowing the man.

The six Salvadorans were unable to pay the court fine and were transported to the Belize Central Prison, where they have begun to serve their six-month sentence, after which they will be deported back to Salvador.