Home Headline $60 mil lost due to illegal logging by Guats over 174 square...
Headline 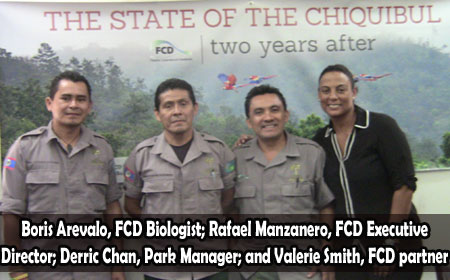 BELIZE CITY, Thurs. Dec. 17, 2015–Over the last two years, Belize’s beleaguered Chiquibul Forest has finally seen a reprieve from an onslaught of illegal incursions by Guatemalans; and while that is great news for the country, the travesty is the staggering economic cost of these incursions, with losses to the tune of $60 million reported since Friends for Conservation and Development (FCD) began monitoring the area in 2007. 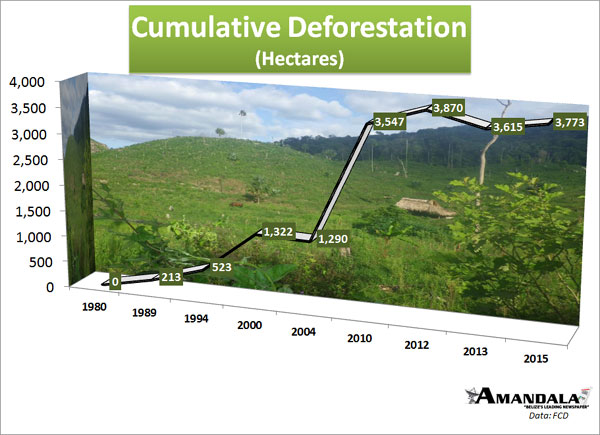 On Wednesday, December 16, an FCD team held a press conference at the Marine Parade Chambers in Belize City to report on where the Chiquibul is two years after its last major report. Since then the FCD was able to fundraise over $320,000 via a national telethon, which was held a month after Belize lost one of its young law enforcement officers whose life was cut short in a brazen murder believed to have been perpetrated by illegal Guatemalan loggers. Everyone remembers the tragic September 2014 murder of Danny Conorquie, the special constable who was fatally shot at the age of 20 at Caracol, where tourists were visiting at the time.

Not a square inch, not a blade of grass – not in the Chiquibul!

“I think the sad situation there was that it certainly really was able to highlight what we have been saying for quite some long time,” said FCD Executive Director, Rafael Manzanero, when we asked him about the role of the Conorquie murder in triggering law enforcement authorities to be more vigilant inside the Chiquibul.

“It was really unfortunate but I think it really brought more of the picture to heart about this true reality.

You will understand that as a result of that [murder], the Valentin Conservation Post was installed and that was one of thekey entrance points…” Manzanero said.

Today, he said, Caracol is one of the most secure areas in the country, with the upgrade in enforcement activities in that zone.

FCD has been providing up-to-date reports to alert Belizeans on the spate of incursions by Guatemalans who have been venturing into the rough terrain to farm corn, beans, pumpkin and even marijuana; to hunt for wild game, including the endangered scarlet macaw; to cut mahogany and cedar logs; to pan for gold in Belize’s rivers; to extract leaves of the xaté palm; as well as to explore for Mayan artifacts.

Eight years ago, the FCD assumed co-management responsibilities of the Chiquibul National Park. The FCD has been working assiduously since then to not only protect the resources on the ground, but also to keep the Belize public fully abreast of the Chiquibul situation, because they believe that it is of utmost national importance. One little known fact which drives this point home which Manzanero shared today, is that more than 43% of Belize depends on water that comes from the Chiquibul.

“Whenever we talk about not losing a single blade of grass, or not losing a single [square] inch of land, in Chiquibul, we see these things on a daily basis, and if we really believe about maintaining our territory… then you will agree that we do need more persons out there,” Manzanero said.

Boris Arevalo, FCD biologist, provided a comprehensive situation report on illegal activities inside the Chiquibuil. Arevalo spoke of the human pressures imposed by persons coming from across the Belize-Guatemala border. Just west of the border, in fact within 10 kilometers of it, are as many as 24 villages with over 30,000 residents. Their territories are vastly deforested, and so they look east to Belize, where there are verdant pastures.

The farming done inside Belize is, remarkably, not haphazard, but very well organized. Derric Chan, Park Manager, said that the Guatemalans who are farming illegally inside Belize claim it’s their land, and it appears that they “rent” from a more influential farmer who may be speculating inside the Chiquibul area, on the Belize side of the border.

The FCD continues to report that there are clearly marked survey lines with pegs and markings, showing that individuals have staked their claim to lands inside the Chiquibul, much of which is clearly under protected status since the designation of the Chiquibul National Park and the Caracol Archaeological Reserve. In fact, Arevalo said that about 40% of the deforestation that has occurred in the Chiquibul was actually inside the Caracol Archaeological Reserve, and up to 6 kilometers (almost 4 miles) inside Belizean territory.

Arevalo said that May 2014 is the last record of illegal logging in the area. With the illegal logging which was observed over the period 2014-2015, the cumulative impact from illegal logging at last report was in excess of 45,000 hectares or 174 square miles. The economic value of the loss has been substantial – BZ$60 million over the last 7-8 years, according to FCD’s stats: BZ$32 million in mahogany losses and BZ$28 million in cedar losses. 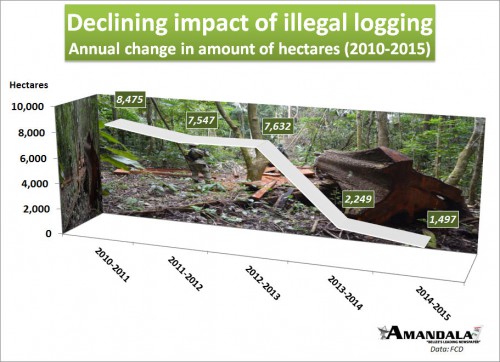 The problem of illegal logging was particularly pronounced between 2010 and 2013, with the impact escalating by about 8,000 hectares, on average, year-on-year. That amounts to roughly 30 square miles—almost triple the size of Belize City. For 2014-2015, the growth in the area impacted by illegal logging was recorded at roughly 6 square miles—a substantially reduced rate.

FCD reports that although illegal extraction of xate has been declining, the assessments done for 2012-2015 indicate a total economic loss of roughly BZ$5 million.

Whereas the FCD has seen the forest rebounding in the South Cebada area, it has seen new milpa clearings cropping up in North Cebada, as the Guatemalans shift across the Chiquibul to conduct their annual slash and burn regime.

Chan said that before the telethon, which raised more than $320,000 for FCD, they only had 7 rangers in the field. They were, consequently, able to hire 18 more, for a total of 25.

With more boots on the ground, they have tripled the coverage of their patrols, from 420 miles in 2014 to almost 1,300 miles in 2015, with more patrols being deployed by FCD, which works as a part of the joint forces team with the Belize Defence Force and Police, as well as supporting government agencies.

These patrols have resulted in more arrests for 2015 than 2014, 13 this year plus three escapes versus 7 last year plus 1 escape. Within the past two months alone, three Guatemalans were apprehended for illegal farming inside the Chiquibul, including inside the national park, where no such activities can legally occur. Meanwhile, 3 of the 6 illegal gold panners caught this year were apprehended in October.

The Government of Belize has also provided $120,000 to the FCD to support its rangers, but these funds will run out within the next two to three months, Manzanero said. The FCD hopes that this could be upgraded to an annual subvention, so that the FCD can maintain its surveillance operations.

The FCD underscores that constant patrols are needed even when agricultural fields appear to have been abandoned; continuous strategic planning is required with joint forces; rangers require ongoing training and better equipment; and road access needs to be improved to strengthen governance.

Manzanero said that increased security presence on the ground has proven to be effective in pushing back those Guatemalans who venture into Belize to illegally exploit the Chiquibul; however, Manzanero emphasized that a sustained effort is necessary, which includes bilateral initiatives.

Manzanero also spoke of the need for a Chiquibul Forest Advisory Council and the development of an integrated management plan for the area.

The FCD has also been working with key stakeholders in tourism, since there is potential to expand the tourism impact of the Chiquibul Forest. Manzanero noted that there are over 200 guides in Cayo alone who depend on going into these areas and more tourists could be attracted to the area. Tourists can enhance their experience in Belize through a well-planned wilderness expedition.