Home Headline Over $60 million: the cost of Guatemalan illegal activities in Chiquibul
Headline

Over $60 million: the cost of Guatemalan illegal activities in Chiquibul 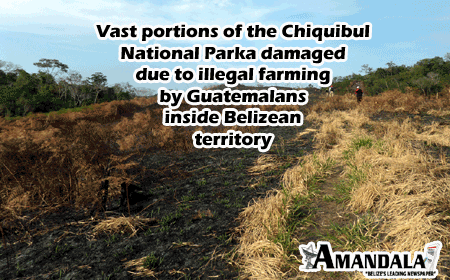 CHIQUIBUL NATIONAL PARK, Cayo District, Thurs. May 19, 2016–The government and people of Belize have been deprived of tens of millions of dollars due to illegal farming, illegal logging, extraction of xaté, large land clearing for farming and other illegal activities being conducted in the Chiquibul National Park in the Cayo District by Guatemalan poachers and farmers.

The tally includes $1.541 million dollars in xate extraction and its loss of royalties, and an overall loss of $60,082,232 due to illegal logging, among other losses.

Amandala visited the Chiquibul and saw the large tracks of burnt land, cleared for farming by Guatemalan farmers, exposing the land to erosions and degradation by the elements.

Rafael Manzanero, Executive Director of FCD, a master patrol officer of Chiquibul, after studying the negative impacts of the activities carried out by Guatemalans in the protected area and national park, reported that an estimated 1,500 Guatemalans were combing the Chiquibul Forest illegally for xaté.

A FCD study showed that xaté populations in the Chiquibul Forest were under stress and that the species faced commercial to local extinction if the illegal harvesting trend continued.

This year FCD second assessment indicated that an increase of 10% in illegal harvesting was recorded, between the years 2012 and 2015, for an estimated value of US$0.577 million. By 2015, 70.3 xaté leaves per hectare were harvested illegally, with an estimated economic value of US$0.482 million.

From May 2014 to May 2015, a 3.3% increase in area expansion was documented. The present illegal logging zone of impact is 45,567 hectares and extends up to 17 kilometers inside Belize, in the Chiquibul.

Manzanero reported that overall, a total of 14,134,800 board feet of mahogany and cedar have been illegally extracted from the Chiquibul Forest, having an estimated monetary value of US $30,047,116.

The FCD reported that last year, Guatemala gold planners were up to 8 kilometers inside Belize and had moved further south, away from the Ceibo Chico Conservation Post, which originally had been installed in 2012 to reduce the gold panning activity. The area where groups of gold planners are active is remote, rugged and dangerous to operate due to the rocky terrain.

The area of impact has seriously been altered. FCD’s stream studies demonstrate that the impacts are already starting to be felt on the headwaters of the Chiquibul watersheds, where erosion, garbage and fecal deposits are known to occur due to the significant number of Guatemalans operating in the area.

Preliminary results show a concentration of pollutant resistant microbes and macro-invertebrates, indicating that the area is already being contaminated. The recent gold panners caught in May were found 10.5 kilometers inside the Chiquibul National Park. They claim to be selling the gold at $150 quetzales per gram (US$22.00 per gram). Persons from Guatemalan towns such as Poptun and as far as Flores and Izabal are known to frequent the villages in search of buying gold.

Manzanero reported that deforestation as a result of agricultural encroachments from Guatemala into Belize is an activity occurring since 1987. Aerial photography analysis indicated that an area of 113 hectares was deforested by them.

Guatemalan farmers traditionally plant black beans, corn and pumpkin. The data indicates that from May 2013 to October 2015, there was a recorded increase of 157.5 ha. In deforested areas, which represents an average of 78.75 ha per year. This signifies 60.6% less than the historical annual rate of deforestation recorded from 1987 to 2011 (200 ha annually). Deforestation as a consequence of agricultural encroachments in the Caracol Archaeological Reserve and Chiquibul National Park remains one of the main threats to the ecological and cultural integrity of the forest.

The FCD reported that the population of Scarlet Macaw, which is Chiquibul’s emblematic species, has also been raided over the years. Wildlife traffickers target this bird due to its value. The 2013 report recorded a total of 22 xateros/poachers sighted, of which two were intercepted by FCD rangers.

During the 2014 Macaw breeding season, a total of 10 nests were monitored, of which 31 eggs were laid.  Of the total number of eggs laid, 13 hatched, but only 8 chicks fledged.  Poachers managed to steal 4 chicks from their nests.

Poaching activity remained persistent in the study area throughout the 2014 breeding season. This year, FCD placed a more robust patrol program and started a hand-rearing of Macaw chicks that were at high risk of being stolen. As a result, no macaws were lost to poaching and instead of 7 macaw chicks making it into the wild, a total of 15 successfully fledged into the Chiquibul wilderness.

It is hoped that in the upcoming talks between Belize and Guatemala in Ankara, Turkey, to be held this Saturday, Belize will seek some compensation, to recover its millions of dollars, stolen by the Guatemalans, conducting illegal activities in the Chiquibul National Park.

(Taken from a report by Rafael Manzanero, Executive Director of FCD.)