7 months and 2 weeks to freedom for Kim Brannon 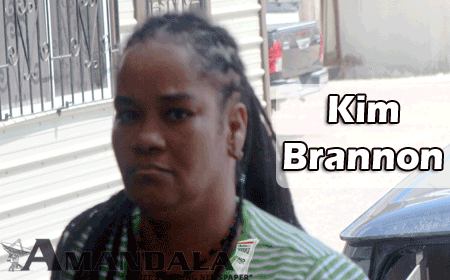 BELIZE CITY, Mon. Apr. 25, 2016–A woman, Kim Brannon, 52, who was initially charged with murder and who was tried and convicted and sentenced to serve life in prison but was given a second chance when the Belize Court of Appeal quashed her conviction and sentence and ordered a new trial in 2013, appeared in the Supreme Court of Justice John “Troadio” Gonzalez this afternoon and pleaded guilty to manslaughter for causing the death of her common-law husband,Anthony “Antics” Herrera, 43.

Justice Gonzalez sentenced Brannon to 8 years in prison and stipulated that the time that she has already spent in prison should be deducted from the sentence.

Brannon had already served 7 years, 4 months and 13 days behind bars. For her to complete her sentence, she will now have to serve another 7 months and two weeks in prison.

Brannon’s case falls into the same category as the precedent-setting case of Lavern “Anti-Christ” Longsworth, who the Court of Appeal had found was suffering from “battered woman syndrome.”

Brannon’s attorney, Leroy Banner, also relied on another precedent-setting case involving another battered Belizean woman, Viola Pook, who has been sentenced to serve an eight-year sentence.

Brannon, apart from being a battered woman, was also sexually assaulted and was physically and emotionally abused.

Before deciding on the sentence, Justice Gonzalez said that he took into consideration the fact that Brannon was in an abusive relationship and she did not waste the court’s time.

Justice Gonzalez also took into consideration Brannon’s attorney’s mitigation plea and the fact that Brannon had no previous conviction.

The incident occurred between 12 a.m. and 1:30 a.m. on December 13, 2008, at the couple’s residence in Burrell Boom. They had an argument and thereafter, Brannon chopped Herrera on his neck with a machete.

In her trial before Justice Herbert Lord that was held between November 1 and November 15, 2011, Brannon was convicted of murder and was sentenced to life imprisonment.

At today’s hearing, the Crown was represented by Crown Counsels Killeru Awich and Rene Montero, Jr.