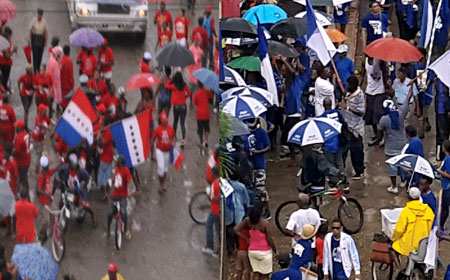 BELIZE CITY, Fri. Oct. 16, 2015
Today is Nomination Day across the country and all political aspirants in the race to capture seats of government in Belmopan have revved up their machines, as more than 80 candidates for the November 4 general elections paid the requisite deposit and were each nominated to contest the elections by six voters from each of the country’s 31 electoral constituencies.
The Nomination Day time-honored tradition is that the candidates of the Opposition People’s United Party (PUP) are nominated in the morning, while the UDP candidates, third parties and independents are nominated in the afternoon.

Periodic rains this morning could not dampen the spirits of hundreds of PUP supporters who lined up behind the party’s ten Belize City candidates, as they marched, singing and dancing their way to the nomination center at the Charles Bartlett Hyde Building on Mahogany Street.

While the candidates went past the police barriers to be nominated, supporters outside kept spirits high, as music boomed out from trucks and they sang and danced, most dripping wet in the party’s blue and white T-shirts, while others sheltered under blue and white umbrellas, with the slogan: “PUP Delivers.”

The PUP Leader Francis Fonseca said, “We feel well! The campaign has been going well across the country.”

Asked to compare his style of leadership to that of the UDP Leader Dean Barrow, Fonseca said, “We have not only characterized it as an election of leadership; we have characterized it as an election of many issues, the security of our country, serious problems with the economy, many social ills, land, housing, and yes, we do believe that Mr. Barrow has been a divisive leader; we believe that his philosophy in government has been, as his ministers has echoed loudly and clearly, UDP first, Belizeans second. And we believe that the Belizean people are tired of that type of leadership and that type of governance.”

Fonseca said that November 4 is a day when the people will take back power from one man and give it back to the people.

Fonseca predicted that the PUP “will do better here in the city than what we did in the last elections. So we feel very good about the support that we have been getting across the country.”

Concerning the UDP’s Dr. Carla Barnett – his opponent in the race to be area representative of the Freetown division, Fonseca commented that he does not think that she has made inroads in his (the Freetown) constituency. “I feel very confident that my relationship with the voters of Freetown over the past fourteen years will prevail, as it has in the last three elections.” he said.

“We will form the government with not less than 18 seats”, Fonseca said, adding, “I think that there are more PUPs than UDPs in this country.”

First time candidate for national elections, the PUP’s Caribbean Shores standard bearer Kareem Musa said, “It’s been long years of a Dean Barrow nightmare – one billion more dollars in debt and the lives of our people have gotten worse … we will deliver Caribbean Shores for the People’s United Party.”

The PUP Lake Independence candidate Cordel Hyde said, “It’s been a long time since 1998 and it’s been a long time since the People’s United Party has won a general election. But you see the rain, brother. People came out in the rain to participate in this process. Doesn’t really faze me. At the end of the day, people know what they are feeling, what they are experiencing and for a vast majority of people, things are hard. At the end of the day, I think people are going to vote how they feel. They are going to vote with their heart and so we are looking forward to November 4th.”

As 3:00 p.m. approached, the massive sea of red that began moving off from in front of the UDP headquarters at the foot of the BelChina Bridge, was finally stretched out along the length of Mahogany Street from its junction at Central American Boulevard.

The UDP, with its considerable war chest, took a page from the book of the September Carnival Road March, as each candidate had a float, packed with supporters and music, marching bands, and all the necessary paraphernalia, flexing the muscle of its incumbency.

Prime Minister Dean Barrow emerged from the nomination station first and told reporters, in response to questions about whether his party’s impressive crowd in any way pointed to the outcome of the approaching elections, “I think it does, because momentum might appear to be an intangible, but I think in the end it helps to create an air of inevitability about the UDP victory and then that feeds on itself and it becomes some sort of self-fulfilling. So I think it does matter.”

The UDP Freetown candidate Dr. Carla Barnett, when the suggestion was put to her that the crowd that was with her was there because of the money, dismissed the suggestion, saying, “No, not at all. The people came out because they wanted to come out and they stood in the rain and they waited with us and they came … people just wanted to walk with me.”

Belize City Mayor Darrell Bradley, who tossed his hat into the political ring for national elections in Caribbean Shores less than one month after winning a second term as mayor, told reporters, “We have done a tremendous amount of work in the city, so that when we go forward, we are campaigning on a record of proven leadership.”

When Barrow was told of the prediction of the Leader of the Opposition that the PUP will form the next government with eighteen seats, Barrow replied, “I would say that the Leader of the Opposition must have had a very good night’s sleep, because he came up with a wonderful dream. I am not going to get into numbers. All I will say is that I have the distinct sense. I have every confidence that we are going to win handsomely.”

Twenty-five candidates of the Belize Progressive Party, Belize’s newest political party, were also nominated today, although there was no fanfare or huge crowds with them, as was reported with the two main political parties, the UDP and the PUP.

Patrick Rogers, the party leader, said, however, that there were difficulties registering some of their candidates.  He said that some of the individuals who were supposed to come with the candidates to nominate them, between 1:00 and 2:30 p.m., got intimidated and did not show up, which created a problem.

Rogers said that they had to scramble to find people to nominate the candidates, but in the end, they were successful, adding that he was elated and excited to be on the ballots, because he now has a chance to change and improve governance in the country, and take the country forward if the people vote him into office.

“I am running for labor and the working class people,” said Rogers.

Among the candidates of his party who were nominated were Jihad Nedal McLaren and Elizabeth Dena.

Nedal McLaren said that the party is running for change. Both major parties have served for 17 years and all they have to show is a debt of billions of dollars each and the country is in the state it is in, he said. Both parties do nothing except borrow, he added, while the BPP brings pride, honor, and integrity to the table.

Elizabeth Dena said that she is elated to be nominated and is running on the platform of education. She strongly believes that education is the key for development and believes in an educated public.