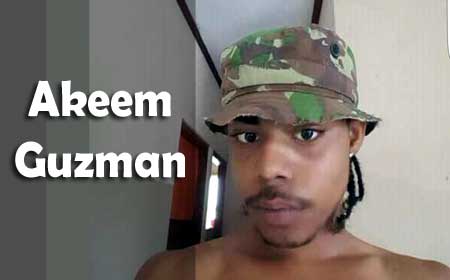 SAN IGNACIO TOWN, Cayo District, Mon. June 26, 2017–The Cayo District has recorded yet another homicide, the fourth within the last nine days. The latest victim has been officially identified as San Ignacio resident, Akeem Alexander Guzman, 21.

According to reports, Akeem went to visit a friend on Flamingo Avenue in San Ignacio Town a little before 1:00 on Sunday morning.

They were socializing, when a single shot rang out, hitting Guzman, who was in a sitting position, in the back. He was quickly transported, to the San Ignacio Community Hospital, where he took his last breath.

Initial police investigations reveal that a masked man, dressed in full black, emerged from nearby bushes and opened fire on the men.

Today, Assistant Superintendent of Police (ASP), Daniel Iche, told the media that the incident is not believed to be gang-related; there were no indications that it was related to any of the previous murders committed in the district, and a motive has not yet been established for the murder.

ASP Iche said the victim was known to police, and he confirmed that a suspect has been detained pending investigations.

In an interview with Amandala today, Geraldine Elizabeth Jones Flores, the mother of the victim, said that she had seen her son less than an hour before he was killed.

According to her, “He looked like something was bothering him.” She spoke to him, but he told her that all was well.

She revealed that after leaving her house, her son had indicated that he would buy two cigarettes and head home, so when cops visited her at around 4 a.m. on Sunday, she was surprised to hear the terrible news that her son was dead.

When we asked why anyone would want her son dead, she told Amandala that maybe it was bad company, which led him to drop out of high school, in first form.

“I won’t say my son was a saint, but at the end of the day, Akeem was my baby and I will always love him…” she told our newspaper.

“I just want to tell the person weh took my son life, I don’t have no grudge, no grievance against them; I forgive them. I left everything in God’s hand,” she added,

She recalled her slain son as an outgoing, friendly and well-loved person who enjoyed catching iguanas. Akeem Guzman leaves behind his parents and two brothers.