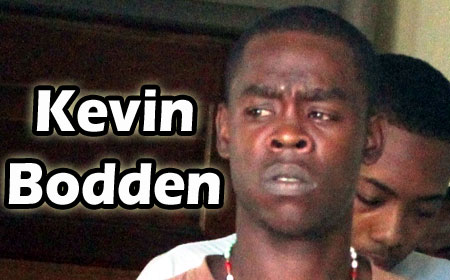 BELIZE CITY–The man who police investigators believe masterminded the A&R robbery on August 20 was remanded to the Belize Central Prison after he appeared before Chief Magistrate Ann Marie Smith, who arraigned him on two counts of robbery.

Bodden and his accomplices allegedly committed the robbery with a firearm, so the question of granting him bail did not arise and he was remanded to prison until his next court appearance date on October 9.

Bodden’s adjournment date is also the date when Leroy Ciego, 28, a security guard employed at A&R, will return to court for his case of conspiracy to commit robbery.

Ciego was the first person to be arrested for the brazen A&R robbery, which occurred after the store had closed its door for the business day of Wednesday, August 20.

On that day, at about 6:20 p.m., a man with a pantyhose over his face held up the A&R security guard at gunpoint, and took control of the store, located at Mile 1 1/2 on the Philip Goldson Highway.

Next, the robbers made everyone lie on the floor. Then they marched their victims up to a second floor room, in which they were locked up.

The robbers, apart from robbing A&R of $12,279 dollars in cash, also made off with $1,230 in valuables that they stole from employees and their school-aged children, who had gone to their parents’ workplace after school.

As police’s investigation into the robbery continues, there may be other arrests.