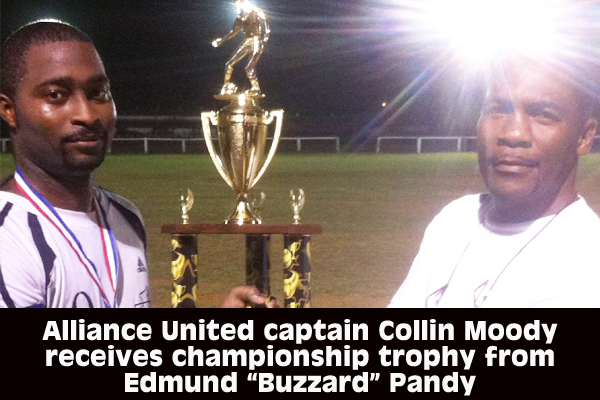 With Game 1 of the best-of-2 games Finals series on April 27 ending 1-nil in favor of San Martin FC over Alliance United, there was a one week break for Agric Show, before the decisive Game 2 for the championship of the Belmopan Football Association (BFA) 1st Division 2014 Tournament this past Sunday, May 11, at the Isidoro Beaton Stadium. And Alliance United came back strong, registering a 2-nil victory over San Martin FC with goals from Wayne Wiltshire (9’) and Israel Clavel (72’).

Alliance United is therefore the Belmopan Football Association 1st Division Champion 2014 with an aggregate score of 2-1 over San Martin FC.

The Belmopan Football Association would like to thank Mr. Edmund “Buzzard” Pandy, Sr. and Mr. John Moody for the presentation of awards.