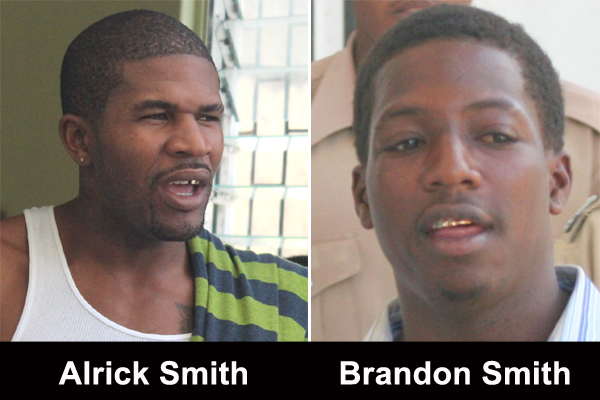 The men are accused of shooting at 4 cops

Two men, Alrick Smith and Brandon Smith (no relation), who have been accused of attempting to murder four on-duty police officers in a case that has been through fourteen months of adjournment cycles in the Magistrate’s Court were freed of the charge on Monday, when Chief Magistrate Ann Marie Smith struck out the case against them.

But by today, Wednesday, police brought the two men back to court and re-arraigned them on the charges before Magistrate Hettie Mae Stewart, who remanded them to prison until their next court date on June 6.

On Monday morning, in striking out the case for want of prosecution, Chief Magistrate Ann Marie Smith told one of the accused men, Brandon “Battery” Smith, 29, who appeared for the preliminary inquiry that morning, “You need not come back on the matter,” after the court prosecutor informed the court that he was not yet in possession of the case file.

The case file, the prosecutor told the court, was still at the Office of the Director of Public Prosecution (DPP).

Before he left the courtroom, however, Smith cautioned the accused, Brandon Smith, that the charges could be brought back.

But after hearing that the matter against him was struck out, Smith, reportedly an affiliate of the PIV gang, quickly made his exit—his animated face unable to conceal his relief as he walked out of the courtroom.

The other accused man, Alrick Smith, 29, a Ladyville mechanic who is serving a six-month sentence for an aggravated assault with a firearm conviction, was not brought from prison until yesterday, Tuesday, when he was told that the case against him was struck out.

Without the case file, the Prosecution Branch of the Police Department is unable to provide the men with disclosure of the evidence police have assembled against them. And neither can the court hold a preliminary inquiry to determine if there is a prima facie case against them to send to the Supreme Court for trial.

But when Amandala asked DPP Cheryl-Lynn Vidal about the case file purportedly at her office, she described the police court prosecutor’s assertion as “absolute nonsense.”

Vidal added: “The file was reviewed by a Crown Counsel and was returned to the Police Department.”

Police charged both men with the four counts of attempted murder after a shooting incident sometime after 11:30 p.m. on Friday, March 15, 2013, in which police believe the men were involved, and after which the men allegedly fired at police.

None of the police officers were hit in the exchange of gunfire, but one of the men, Alrick Smith, suffered a gunshot wound to his abdomen when police returned fire. He had to be hospitalized for about two weeks.

The incident occurred while police were processing a homicide scene at which Leon Humes was gunned down, and they spotted a heavily tinted car speeding past Poinsettia and Black Orchid Streets.

Police immediately set chase after the blue Mercury four-door sedan that had sped past them. But the driver, unable to outmaneuver the pursuing police teams on motorcycles and in a police mobile unit, ran the car into a drain.

The passenger, identified as Brandon Smith, alighted from the car and allegedly fired at police before escaping into the night. But Alrick Smith, the driver, was immobilized inside the car with a police bullet in his abdomen.

Police rushed him to the Karl Heusner Memorial Hospital, where he was admitted in a stable condition.

When the Chief Magistrate arraigned him on the charges, Smith asked the court to remand him into custody for the full three-month remand period, following which he would be eligible for bail at the Magistrate’s Court.

Since the incident, the car remains impounded as a police exhibit at the Queen Street Police Station.

In December 2011, Brandon Smith and four other men were acquitted of the October 2009 murder of Randy Coye, 20, whose body was found in Lords Ridge Cemetery. He had been stabbed, beaten with a tombstone, and shot.