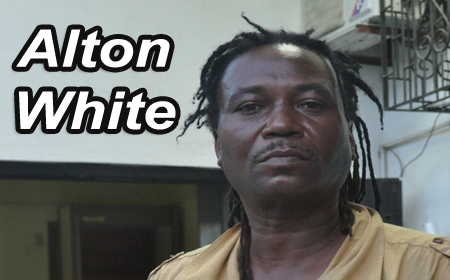 BELIZE CITY–A Belize City man and his common-law wife who were facing charges of drug trafficking and possession of a controlled drug managed to beat the drug trafficking charge, which carries a minimum fine of $10,000 along with a mandatory 3-year prison sentence upon conviction.

Alton White, 50, an amputee who regained his mobility with a prosthetic leg and who is self-employed as a taxi driver and food vendor, was facing the two drug charges along with his common-law wife, Idolly Frazer, 36.

Their case concluded late this afternoon in the courtroom of Magistrate Herbert Panton, whose ruling dismissed the drug trafficking charge against the couple, who reside at 44 Collet Canal, in the Conch Shell Bay area.

When referring to the sentence to be imposed for the conviction for possession of more than 119 grams of cannabis, Panton indicated that his court is entering “virgin territory,” so he has deferred sentencing of White until Monday, December 1.

The two charges against Idolly Frazer were dismissed because Panton, in a summary of the evidence, said that the prosecution had made no connection between Frazer and the cannabis the Gang Suppression Unit (GSU) discovered inside the couple’s home on Tuesday, September 3, 2013.

White managed to clear himself of the drug trafficking charge when he punched holes in the prosecution’s case with his pointed questions to PC Elmer Nah, the last witness who testified for the prosecution.

In his testimony, Nah told the court that the GSU went on an anti-drug operation in the Conch Shell Bay area, where they were also searching for illegal firearms.

GSU policemen spotted White playing cards with some other men, who were all searched, but nothing incriminating was found on them.

White, however, was taken to his home, where a three-hour search ensued, leading to the discovery of cannabis that was found in two different locations.

In his testimony, Nah told the court that when the cannabis was found, White’s response was, “Da fu me the weed. You are taking my life’s savings.”

The GSU policemen found 11 grams of cannabis wrapped in a black plastic bag in a dresser drawer in the bedroom. A further search in the bathroom yielded 108 grams inside the bathroom toilet bowl.

Prior to Nah’s testimony, the court heard from the arresting officer, Corporal Gian Young, who, Panton said, gave a very thorough account of what transpired during the search of the couple’s home. After Young had finished testifying, White did not cross-examine him.

Nah, however, was not so fortunate, because White had a number of questions for him to answer that struck at the heart of the drug trafficking charge against him.

White began his cross-examination of Nah by asking, “I may not be articulate or know the law, but did you not ask me to give up somebody?”

“Did anybody ever tell you that I sold them marijuana?” White asked.

“Did you ever see me sell marijuana?” White pressed.

“How do you go about proving that I intended to sell marijuana to anybody?” White asked.

“Did I not tell you that the marijuana you found was for my personal use?” White asked the police witness.

“Yes, you did tell me that,” Nah replied.

After Panton explained to White the options he had for putting forward his defense, White decided that he would go on the witness stand and give sworn evidence in his defense.

White began by telling the court that throughout his 50 years of life, he had never been to court for any kind of charge.

He carefully explained that he uses marijuana to alleviate the pain that his amputated right leg causes him.

White explained that when he discovered that the GSU was in their neighborhood, he went home and hid his stash of marijuana, because he realized that although the drug helps with his pain, it is illegal and he did not want to get into trouble with the law for the $40 worth of marijuana he had in his house.

White explained that the only treatment which helps him to cope with his pain is the marijuana which he uses by either smoking or boiling it.

Then he did the dramatic. He lifted up the leg of his trouser and showed the court that his right leg was amputated, and that he had a prosthetic limb.

After White had finished with his testimony, Frazer got up and suggested to Nah that it was he who had found the marijuana, and not Corporal Young, as Nah had testified.

Following the cross-examinations, Panton adjourned the hearing for a few minutes.

Upon his return to the bench to deliver his judgment, Panton relied on an appeal from the Toledo Magistrate’s Court in which the applicant, Lino Ical, successfully appealed his conviction of drug trafficking. The appeal was heard in the Supreme Court of Justice Adolph Lucas.

Panton said that he used the case of Ical because there were some similarities between the present case and that of Ical.

“In this case, the defendant had always accepted possession of the marijuana,” Panton said. He told the court that the singular issue in deciding on the drug trafficking charge was whether or not White had intended to sell the marijuana.

“The prosecution must prove beyond the shadow of a doubt that the accused would have sold the drug,” Panton explained.

“Now, Mr. Learned Prosecutor, we find ourselves in virgin territory, because we have never had to sentence someone for possession for such a quantity of marijuana before, so I am adjourning the sentencing,” Panton explained.