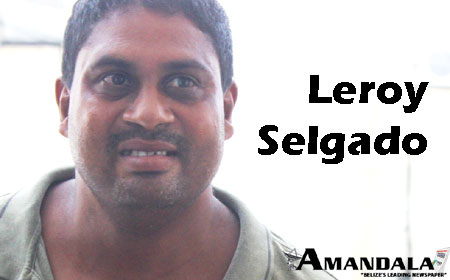 BELIZE CITY–Leroy Selgado, an Anchor security guard whom police busted with a firearm, pleaded not guilty to possession of an unlicensed firearm and ammunition when he was arraigned before Magistrate Dale Cayetano this morning.

Due to the nature of the charges, Cayetano remanded Selgado, 40, to prison until his next court date on September 30, 2014.

Selgado, a resident of Tropical Park, located on the George Price Highway, was busted on Tuesday, September 9, at Garden Building, where he was posted as a security guard.

In court, after Cayetano explained to Selgado that his court could not grant him bail, Selgado told the court that he was on his job site, and that the gun of which he is charged with being in possession, is a gun that is licensed to his company, Anchor Security, and that the license for the gun is sitting on the desk of the Commissioner of Police.

Magistrate Cayetano told him that if that is the case, then that license would have to be brought to court.

Be that as it may, however, no one from Anchor Security showed up at the arraignment, at which Selgado was unrepresented.

Police charged Selgado with keeping an unlicensed firearm, a .9mm CZL pistol that they found him carrying on the compound of the Garden Building, located on Coney Drive.

The gun was loaded with 8 live .9mm rounds, so he was also charged with keeping unlicensed ammunition.