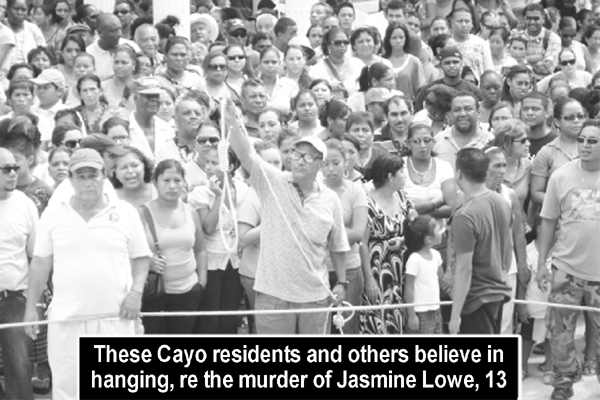 Some businesspeople and other concerned citizens, however, urge reinstatement of death penalty

Canon Leroy Flowers, President of the Belize Council of Churches, has confirmed to Amandala that the Anglican Diocese in Belize has conveyed to the Barrow administration the official position of the Anglican community in Belize against the application of the death penalty in Belize.

Last week, a shocking daylight murder of a young woman sparked a commitment from Antigua and Barbuda to reinstate the hangman’s noose.

Canon Flowers told our newspaper that the position of the Belize Anglican church was concretized via resolution at the last October’s synod—the highest governing body—against the death penalty.

We can’t implement the laws, so copies were passed to the governing authority, Canon Flowers said.

At last week’s sitting of Parliament, Prime Minister Dean Barrow tabled a bill from the Anglican church in Belize, for a change of name from The Branch of the Church of England in Belize to the Anglican Diocese of Belize, so that the church can be correctly identified with the other dioceses in the Province of the West and the worldwide Anglican community, said Barrow.

Of note is that back in 2008, 14 bishops of the Anglican Church in the Province of the West Indies, passed their own death penalty resolution, saying that they were “calling our people to stand with us in our opposition to the death penalty.”

The resolution passed by the Belize Anglican community is substantially similar to that passed by the West Indian group. It stated that “…in our prayer, study, reflection and experience, the death penalty has not been proved to be a deterrent.”

Canon Flowers said that to date, the Anglican Diocese in Belize has not received a reply from Prime Minister Barrow to their resolution. However, Amandala understands that at last November’s business forum with PM Barrow, members of the audience urged the resurrection of the death penalty, and that’s when Barrow informed the group that the Anglicans had approached him to have the death penalty abolished.

The Anglican Church’s resolution was passed about a week after Cayo residents protested the brutal murder of Jasmine Lowe, 13, and openly called for the Belize Government to reinstate the death penalty. In 2011, the Government of Belize had amended the law to say that the death penalty cannot be challenged on constitutional grounds.

Canon Flowers told Amandala that he hopes when the death penalty issue comes up, their resolution would be considered.

Whereas they are concerned about the high level of crime in Belize, he said, they don’t think that killing anybody will reduce it.

The way things are done now with law enforcement, it is probable that an innocent person could get executed so that the powers that be, could be appeased, he went on to say.

The Anglican resolution says, “…the death penalty disregards the power of God’s grace and sovereignty in human life, which offers the possibility of transforming individuals and circumstances deemed ‘irredeemable’ by human judgment.”

The resolution goes on to say that the Messiah “challenged the death penalty of his culture, calling on those without sin to ‘cast the first stone….’”

It noted, however, that “there is room in the church for honest differences of opinion concerning the use of the death penalty.”

Anglicans in Connecticut, USA, say that they had meaningful influence in getting the death penalty abolished in that state last April.

The last murder convict hanged in Belize is Kent Bowers in June 1985. We were unable to get current data at the time of this report. John Woods, chairman of Kolbe, which administers the Belize Central Prison, said he was not able to say specifically, but that there are still very few Belizeans on death row. There are murder convicts serving life sentences, which amounts to about 15 years behind bars.

Those serving more than five years on death row without an execution get their sentences commuted to life in prison. Long waits on death row, as well as persistent criminal appeals, have essentially served to stay several death penalty executions in Belize.