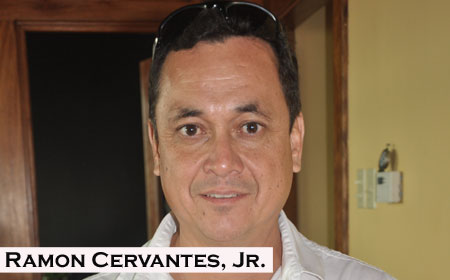 ORANGE WALK–Deputy Prime Minister, Hon. Gaspar “Gapi’ Vega, has instructed his attorney, Rodwell Williams, S.C., Prime Minister Dean Barrow’s law partner, to write his political opponent, Opposition People’s United Party (PUP) standard-bearer for Orange Walk North, Ramon “Monchie” Cervantes, Jr., demanding that he either offer a retraction and an apology, or face a libel claim for statements that were broadcasted on LOVE FM in a recorded conversation purportedly between Vilma Cervantes and Manuel “El Pelon” Castillo on Wednesday, November 5, during a memorial ceremony for Ramon Cervantes, Sr., who was kidnapped and murdered in July.

Vilma is the wife of the late Ramon Cervantes, Sr.

In Williams’ letter, dated Sunday, November 9, 2014, he states that he had been “instructed by the Hon. Gaspar Vega, Deputy Prime Minister and Minister of Natural Resources & Agriculture and the area representative for the Orange Walk North” to send the subsequent statements in the missive.

The letter goes on to state, “On Wednesday, November 5, 2014, at Mamayal Farm, in San Roman Village, Orange Walk District of Belize at about 1:30 p.m., you, Mr. Ramon Cervantes, Jr., the political opponent of the Hon. Gaspar Vega, played a voice recording in the Spanish language of a conversation which you claimed was made and recorded on October 8, 2014, at 8:23 p.m. between one Manuel “El Pelon” Castillo, who is a fugitive of justice for the alleged murder and abduction of Ramon Cervantes, Sr., and your mother, Mrs. Vilma Cervantes, and the same was published by, carried and broadcast live on Love FM and Fiesta FM Radio Stations to the general public in Belize and on the Worldwide Web.”

“The words published by you were calculated to disparage our client in his office as a Minister of Government, and as a law-abiding person,” the letter says. It further asserts, “The words were baseless, untrue and amounted to a very serious libel on our client, and have caused him considerable distress and embarrassment and have put him and his family in fear for his own safety and well-being.”

Williams’ letter continues: “In the circumstances, our client requires of you as a matter of urgency, a full and equivocal retraction and apology in terms approved by us and an undertaking not to repeat the allegations.”

The letter goes on to say that “the apology, as approved by us, is to be written and signed by you and then read out and broadcast over the airwave and be posted with equal prominence given the offending publication.”

Ramon Cervantes, Jr., has until Monday, November 17, to comply with the demand.

Today, Wednesday, however, Cervantes told Amandala that he has no apology to make to Hon. Vega.

Given his stance on the matter, it appears that on Monday, a defamation lawsuit will be filed against him “without further notice,” as Williams’ letter informed him.

Manuel Castillo, 37, is Orange Walk’s most wanted man. Castillo, police believe, was the mastermind behind the murder of Ramon Cervantes, Sr., but the 15-minute recorded conversation between him and Vilma Cervantes, the widow of Cervantes Sr., and the mother of Cervantes, Jr., has set in motion an unprecedented chain of events.

After the telephone conversation was aired, Hon. Vega hastily issued a press release condemning “those that caused the recording and allegations to be played, and those that carried the broadcast.” “The DPM warns that no other media house should carry or in any way further circulate the reprehensible libel against him,” the release further said.

The DPM release added, “He has already consulted his lawyer who will take action against anyone that ignores this warning.”

On Friday, Ramon Cervantes Jr., and his family delivered the recorded conversation to the Orange Walk police station.

The police, however, have not made any announcement of whether receipt of the telephone conversation from the Cervantes will lead to the re-opening of their murder investigation, nor has the Police Ministry made any statement about the allegation, complete with name-calling, that police officers stationed in Orange Walk were involved in the murder plot.

In the aftermath of the airing of the bombshell telephone recording, police issued a press release insisting that the only suspects in the murder were three men already charged in court and in lockdown, and Manuel “El Pelon” Castillo, who has reportedly fled the country.

In his alleged recording, Castillo said that he is in hiding because his underworld accomplices had tried to kill him when he refused a contract to kill Cervantes, Jr. Police, however, are of the opinion that Castillo fled the country because he knew that they were looking for him to arrest him for the murder of Cervantes, Sr.

As a matter of note, the story of the recorded conversation and accusations was carried in the Mexican daily newspaper Por Esto.