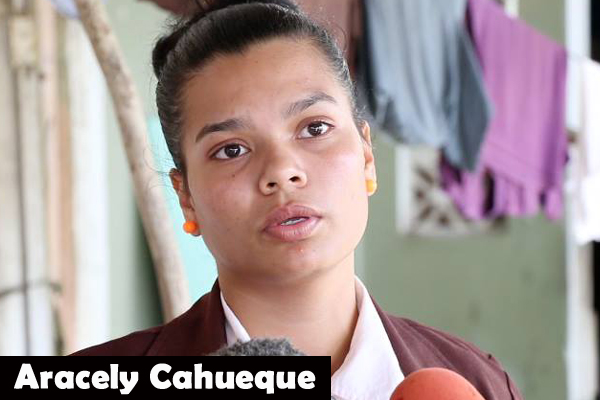 The former Corozal beauty contestant, Aracely Cahueque, 21, who was charged with three counts of abetment to commit murder for the gruesome October 2010 killing of Raylene Dyer, walked away from the indictments this morning after Justice Dennis Hannomansingh instructed the 9-member jury in his Belmopan Supreme Court to return formal not guilty verdicts, abruptly ending the trial, which had 16 more prosecution witnesses.

Cahueque is now the fourth and final person accused of involvement in eighteen-year-old Raylene Dyer’s heinous murder to be acquitted. Her head had been cut off and her body dumped in a river, never to be found.

The acquittal verdict so inflamed Raylene’s relatives that a fight between broke out outside the court between the women from her family and women from Aracely’s family. Police and others who knew the families had to intervene to restore order.

Earlier this month, the three men accused of the brutal execution – Jason Anderson, Darren Banner and Brandon Budna – walked from the murder indictment due to bungled police investigative methods.

In the murder trial, the prosecution’s case against the three men crashed after Hannomansingh ruled against admitting into evidence caution statements given to police by the accused men, because the statements were procured contrary to the rules set out in the Law of Evidence for admissible statements.

A similar fate befell the prosecution’s case against Aracely Cahueque when her caution statement, in court, was ruled as inadmissible, because she had suffered what her mother described in her complaint to the Ombudsman as “police brutality,” alleging that police beat a confession statement out of her.

That alone, however, did not trigger the unexpected crash of the prosecution’s case against Cahueque. At the center of the prosecution’s meltdown is an “open statement” purportedly given by Brandon Budna, who had agreed to be a witness for the prosecution after he had been visited by Director of Public Prosecutions, Chery-Lynn Vidal, on October 27, 2010.

On the day following that visit, October 28, Assistant Superintendent of Police Hilberto Romero visited Budna at the Belize Central Prison and recorded the open statement in the presence of Justice of the Peace Ann Lind.

Vidal’s prison visit to Budna was not revealed to the defense in the initial prosecution disclosure of the evidence against Cahueque until about two hours before she took the witness stand at the trial Wednesday afternoon, and Vidal maintained, under cross-examination from Dickie Bradley, Cahueque’s attorney, that “I had done nothing wrong.”

But on the witness stand, Budna, who testified after Vidal, denied giving the statement to Romero. He insisted that what was in the statement was what Romero had told him, when he recorded a caution statement on October 18. The prosecutor, Kayshia Grant, then made an application for Budna to be treated as a hostile prosecution witness.

On Thursday, submissions were made by both the defense and the prosecution to admit or not to admit Budna’s statement as an exhibit in the case, and on Friday morning Justice Hannomansingh ruled that the statement was inadmissible. The judge characterized the manner in which it was obtained as unethical.

Following the judge’s ruling not to admit Budna’s statement, the prosecution decided to throw in the towel and not submit any further evidence, paving the way for Cahueque’s acquittal.

After the hearing, Bradley told reporters that when Budna came to court his statement was not shown to him (Budna) so that he could verify whether the signature on the document was his or not, because Budna had told the court that he is suffering from retinitis pigmentosa, and his vision is continuing to deteriorate.

Bradley went on to explain that, in order to establish that the statement was obtained from Budna, they presented the officer who recorded him and the JP who was present, but Bradley questioned why a JP was present, and why an official at the prison or some neutral person was not used as a witness instead.

On October 18, 2010, Raylene Dyer left her Coney Drive home with her two-month old daughter. She would never be seen again, and neither would her body be discovered. It is only from the confession statements police supposedly extracted from the accused persons that Dyer’s ultimate fate has been learnt. She was killed and then beheaded; her body was dumped in a river, from where it was never recovered.

According to the narrative that made its way into the public domain, part of which has since been confirmed through the statements given to police, Aracely Cahueque, the alleged mastermind, had plotted to fool her boyfriend into thinking that she had a baby for him. She was living in Corozal and he was living in Cayo.

But to pull off this major deception, she needed a real baby. It has been said that Dyer’s family members had confirmed in recorded statements that Raylene had loaned her baby to Cahueque on two separate occasions prior to the murder, but Raylene’s family bitterly disputed this after the verdict was read.

In the open statement that Budna denied giving to ASP Romero, his encounter with Cahueque is carefully detailed. The two had met during a management class at UB’s main campus in Belmopan.

He alleged that one day he got a call from Cahueque asking him, if he “could deal with someone” for her. When he inquired in what manner, she allegedly told him that she “wanted someone killed.”

But when she explained further that the person was a woman, Budna, expressing surprise, allegedly told her, “I’m not that kind of person.”

To get her off the phone, he allegedly told her that he would see if he could hire someone for her.

Cahueque, according to the statement, called him back a few days later, this time in desperation, alleging that she was a member in a lodge and her sister was being held captive by the lodge and if she did not go through with killing this person, she would not see her sister again.

On the day Raylene was killed, Budna had arranged to meet Cahueque in Roaring Creek. When the James Bus stopped, according to Budna, Cahueque got off the bus with a young woman and a baby. Cahueque was carrying the baby. As Raylene walked behind them, Cahueque whispered in his ears that she was the woman to be killed.

In his alleged statement read to the court, Budna detailed how Cahueque took a taxi and left him and Raylene in Roaring Creek. By the time she called inquiring if the job had been completed, he had met his friends, Darren Banner and Jason Anderson. On one of the occasions when Cahueque called, Budna had, according to his statement, facilitated a conversation between her and Banner, and she promised to pay $600 after the job was done.

In the alleged statement Budna had said that they drove for approximately half an hour on the Valley of Peace Road, before stopping to carry out their cruel mission of killing Raylene Dyer, by cutting her throat and then cutting off her head, then tossing the body and head into the river.

Cahueque never paid the $600, according to Budna’s statement, and in her caution statement, which was not accepted by the judge but read in court, she told police that one of the accused men had told her, “Raylene’s head was cut off, and you’re next!”