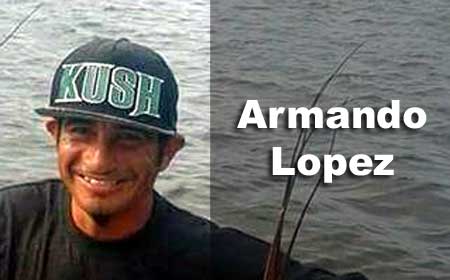 SAN PEDRO, Ambergris Caye, Mon. Aug. 21, 2017–Armando Lopez, 36, a carpenter of San Pedrito, was shot and killed in a club on Barrier Reef Drive while socializing with his friends at about 2:30 yesterday afternoon. Police said that an unknown gunman entered the club, fired a shot that hit Lopez in the right side of his chest, and then ran off.

The bullet exited the left side of Lopez’s chest and went into his left arm. He was rushed to the San Pedro Polyclinic, but he died shortly after.

In a press brief held this morning at the Raccoon Street Police Station, ACP Edward Broaster said that two men, one from San Pedro and one from Belize City, have been detained for questioning. The man from the city was detained as he was trying to board a water taxi in San Pedro to go to Belize City.

Witnesses told police that two men were outside the bar, and one of them went in and fired the shot that hit Lopez in the chest. The shooter then ran outside the bar, joined the other man, and the two of them ran toward the river, which is a short distance away. The men got into a boat and escaped.
Police went to the scene of the shooting quickly, but Lopez died shortly after.

Lopez has no known family in San Pedro; it is believed that he was from the Corozal District. Those who knew him said that he was a humble man who never had conflicts with anyone. A friend of his said that he used to be a fisherman, but that he worked at other jobs, including construction and carpentry.

San Pedro police are seeking the assistance of the general public and encourage anyone with information about the incident to visit the San Pedro Police Station on Pescador Drive or call 206-2022. Police say that all sources will be treated with the strictest confidentiality.