Home Headline Arson, drowning – what next in Ladyville?
Headline

Arson, drowning – what next in Ladyville? 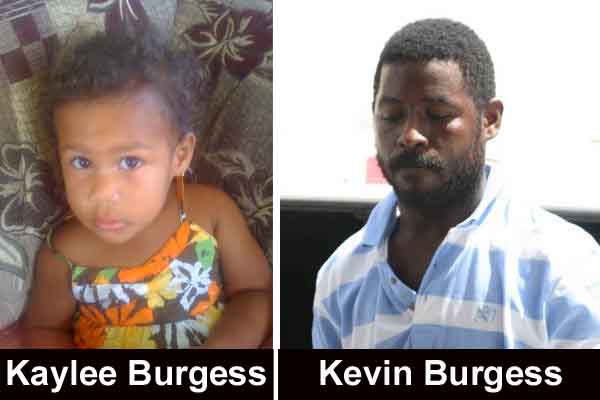 Lovers quarrel and their baby drowns!

A terrible tragedy in Ladyville on Wednesday afternoon has resulted in the death of a baby girl, almost 2 years old, who was found apparently drowned in a bucket of water on the verandah of her grandmother’s house after her mother was released from police custody that same afternoon.

The mother, Deidra Pratt, 23, had been held by Ladyville police in connection with the burning down of her former common-law husband’s home in the same village on Tuesday night. When Pratt, the mother of three children, was in custody, she did not know where her baby Kaylee Burgess, was, but told police that she thought that she was with her father, Kevin Burgess, 32, a mechanic of Mile 9 ¾ on the Northern Highway.

Sometime late Wednesday night, however, the child was found dead at her grandmother’s home, where her mother now lives.

The Burgess family is confused, however, because while Kaylee was reported missing around 6:00 p.m., they said that the child was seen with an aunt at a Chinese store around 8:00 that same night.

The saga began around 10:30 p.m. on Tuesday, August 4, when Burgess’ home at the Quilter Estate in Ladyville in the area of the Ladyville National Fire Service on the Northern Highway, was gutted by a fire, which, he told police, was deliberately set.

Kevin Burgess’ brother, Michael Quilter, told police that around 10:30 that Tuesday night, they were at home and saw his ex-sister-in-law, Deidra Pratt, who lives with her mother, riding into the yard, which has five houses, one of which she had lived in.

Shortly after she departed, Quilter said, the house became engulfed in flames. The family said that they quickly called the nearby National Fire Service, who responded immediately, and the fire was extinguished. After the fire was put out, the fire investigators concluded that the cause of the fire was arson.

Kevin Burgess, who was not at his home or in the yard, went to the Ladyville police and made a formal report, and the following day, Wednesday, at about 2:30 p.m., his ex-girlfriend, Deidra Pratt, was intercepted on board a passenger bus at a road block in Ladyville, in front of Manatee Lookout, going in the direction of the city. She was interviewed and detained at the Ladyville Police Station. She vehemently denied all knowledge about the fire.

However, around 6: 00 p.m., she was informed that her daughter, 2, was missing. Police said that she was released to go and locate her daughter. Four hours later, Kaylee was found dead in a bucket of water on the verandah at Pratt’s mother’s residence.

Police said that when they arrived at the house, they saw Pratt holding the child in her arms, but the baby was already dead. Baby Kaylee Burgess was taken to the Karl Heusner Memorial Hospital, where she officially was declared dead on arrival.

They are awaiting the result of a post-mortem to begin investigations into whether anyone would be charged for the death of the child.

Kaylee would have celebrated her 2nd birthday tomorrow, Friday, September 7.

Police yesterday morning, Wednesday, at about 7:00, had arrested the baby’s father, Burgess, because of a report made to them by Martha Mejia, Pratt’s sister, who told officers at the Ladyville Police station that at 11:15 on Tuesday night, she was asleep and was suddenly awakened by a loud noise. Upon checking around the house, she saw her brother-in-law, Burgess, standing outside her dining room area: he had punched in three of her glass louvers.

Michael Quilter, the child’s uncle, told Amandala that around 6:30 p.m. yesterday, Wednesday, police came to their house to pick up his brother, Kevin Burgess, the father of the child, on the strength of a report that the child was missing from the home of her mother, and they were conducting investigations. However, he was released after he was interviewed, and around 10:30 p.m. they, Burgess and Quilter, were told that the girl had been found in a big blue chlorine container that contained water, at her mother’s home.

In court today, Thursday, a distraught-looking Burgess pleaded guilty to the charge of damage to property, but after hearing the facts, he told Magistrate Aretha Ford that he did not agree with it because he only touched the window.

An equivocal not guilty plea was entered and he was offered bail of $1,000 and one surety. He is to return to court on October 8, 2012

Burgess’ family said that Pratt had lived in their yard with Burgess for about three years and was the mother of the three children. She moved out of the house in December last year and was living in the Japan area of Ladyville with her mother, because of domestic problems.

Police said that the file will be directed to the DPP for her directives, after which they will move forward.

In the matter of the alleged arson, no one has yet been arraigned for that crime.

Kaylee Burgess is survived by her mother, Deidra Pratt; father, Kevin Burgess; a brother, and a sister. She is also survived by her grandparents, as well as a host of aunts, uncles, cousins and other relatives.