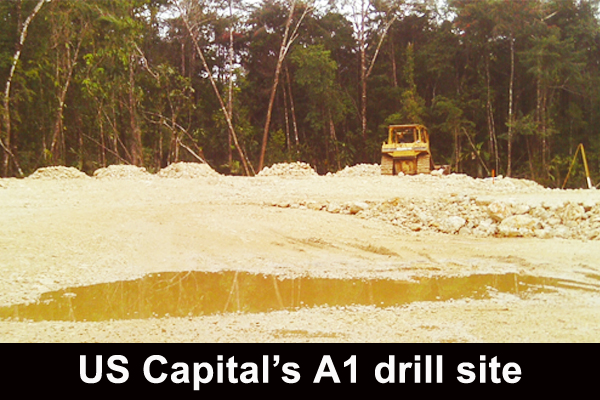 Of late, indigenous Mayan advocacy groups such as the Maya Leaders Alliance (MLA), the Toledo Alcaldes Association (TAA) and the Sarstoon-Temash Institute for Indigenous Management (SATIIM) have been vehemently protesting about the Government of Belize (GOB)’s decision to waive the expiration date for US Capital Energy’s permit to conduct pre-drilling activities within the Sarstoon-Temash National Park without the consent of the buffer communities surrounding the park.

In a letter written yesterday to Belize’s Prime Minister, Hon. Dean Barrow, SATIIM categorically describes Government’s actions in regards to the waiving of the expiration date for US Capital Energy’s concession as “the historical trademark of a corrupt, inept, despotic and discriminatory government.”

SATIIM, which represents the buffer communities of Midway, Conejo, Crique Sarco and Graham Creek, is lashing out at the Government because they are stating that the permit has been declared by the Supreme Court as “unlawfully granted” and suggests that GOB’s action verifies its “colonial and racially-entrenched mindset towards the indigenous peoples” by regressing and circumventing consecutive rulings by the Supreme Court which affirm customary Maya land rights.

Although PM Barrow has publicly said that consultation with the said communities won’t necessarily stop US Capital from proceeding with its work, SATIIM believes that it is not “a good faith effort” and maintained it is about obtaining the free, prior and informed consent of all the buffer communities.

Yesterday, however, the Director of the Geology and Petroleum Department, Andre Cho, told Amandala that GOB and US Capital mainly need to consult and seek consent from the villagers of Sunday Wood, since they stand to be directly affected by the operations of the oil exploration company.

He informed us that the only time the companies would need to liaise with anyone other than Government is in the event that the activities need to be conducted on private property, whereby the land owner/s would need to be compensated for any damage or disturbance that affects their property.

In the case of Crown lands, we were notified that the companies only need permission from Government, and in the case of protected areas, such as the Sarstoon-Temash National Park, authorization must be provided by the Forest Department.

Cho remarked that US Capital Energy (Belize) Ltd., therefore, is in the clear due to the fact that they received both the permit to enter the park from the Forest Department and the Production Sharing Agreement (PSA) which gives the company the license to explore and the right to drill if and when a quantity of oil is discovered within their block.

The Director of the Geology and Petroleum Department said that Justice Michelle Arana’s judgment never cancelled US Capital’s current oil exploration permit, and conceded that consent will be sought from the Mayan community in the immediate area in order for US Capital to conduct further oil exploration activities in the Sarstoon-Temash National Park.

That community is known as Sunday Wood Village, and according to Cho, the Attorney General’s Ministry – which is GOB’s legal advisor – has stated that Government and/or US Capital only needs the consent of that particular village, since it is located nearest to US Capital’s drill site although entities like SATIIM, MLA and TAA beg to differ.

Last Thursday, May 1, Amandala went to Sunday Wood and we spoke with the village chairman, Maximilliano Tush, who indicated that he does not personally have a problem with the oil exploration activities that are taking place in the national park, since it promises to bring much-needed economic and social benefits to his community, but he mentioned that he intends to hold consultation sessions with his constituents to get their collective opinion in regards to the pre-drilling operations currently being carried out by the oil exploration company.

As we understand it, US Capital plans to construct 2 oil wells – one in the Sarstoon-Temash National Park near Sunday Wood, and the other near the village of Crique Sarco – while their current PSA allows the company until January 2016 to carry out their drilling operations.