Bad news at a bad time for 200 Belizeans! 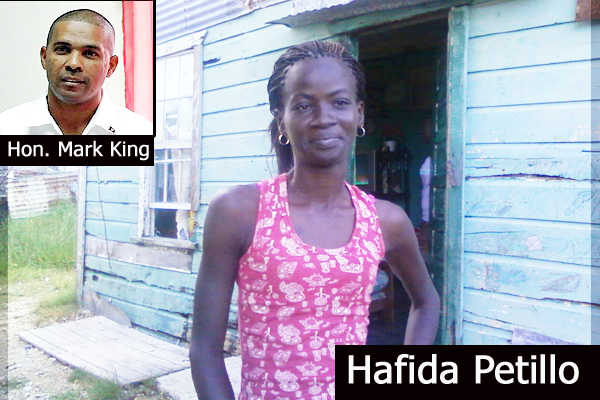 “I am disappointed … things are hard … the timing is wrong!” – single mother who has just been fired

“… meanwhile, they have the Gang Truce working, giving them money to buy more guns, more bullets to kill each other, while we single mothers are struggling…” – another terminated mother

Two hundred employees of the Southside Rejuvenation Project (SRP) began losing their jobs as of last Friday, August 24, in the “back to school season” for single mothers and other breadwinners, and the fate of hundreds of others is in limbo this week.

Minister of State for Human Development, Poverty Alleviation and Social Transformation, Mark King, cut a solitary figure on Friday morning at the NCFC Conference Room on Cleghorn Street, where he delivered the bad news for workers in the SRP, a one-year project begun three years ago as an urgent response to bad social conditions on Belize City’s Southside.

“Effective August 10, 2012, the 2.29 million dollars allocated to these programs has been exhausted and the wages for the week of August 13 was paid through supplemental funds. Therefore, effective today, Friday, August 24, we will be scaling back with 200 members from the Southside Rejuvenation Project. These persons will be paid full salaries and severance, which should last them through to October, where we will then exhaust our energies to find projects for them to have a more robust employment. These programs will continue to scale back with the remaining members until another program can be reasonably afforded or funded,” King announced.

By “these programs” he was referring not only to the SRP, but also to the Gang Truce and Conscious Youth Development Program (CYDP), which have not yet lost any workers, but are widely expected to do so because “no money no deh.”

Mother of two young children, Hafida Petillo, 30, of Kraal Road, received her final wages and two weeks’ notice pay on Friday – a total of $449. She had been working with the Project for eighteen months as a “laborer”, doing raking after the men who cleaned drains.

According to Petillo, when she went to work on Friday, she was simply handed her letter of termination and pay without any prior notice or explanation – a total surprise.

She and her co-workers had heard rumors that people would be let go, on the heels of having their pay reduced earlier this year from $175 for five days work to $103 for three days’ work, but she had not expected to be fired at this time.

“…they didn’t even have a meeting with us…I am disappointed…I was used to having a job and getting money to provide for my kids…” she told Amandala today.

She said she “caught a glimpse” of Friday night’s newscasts which featured the Minister’s press conference. When we told her that the Minister had effectively promised to help the released workers find jobs elsewhere, she replied, “How will they help us find jobs now, and when will we get jobs? 2016, four years from now? They let us go in a really rough time for the single mothers, when things are hard. It was the wrong time.”

Another former worker who did not give us her name said she received $790 for 2 years of service – but she was not even at work! A relative brought the termination letter to her at home, she told us.

This woman is a mother of three; her oldest started 4th Form today and her two younger ones will be, entering Standard 6 and Standard 2 in the upcoming weeks.

She told Amandala that the workers in the SRP had to buy their own equipment to do the work – rakes (she bought three, the third of which she still has), grass cutters, files, etc., and their pay was sometimes cut for things as simple as wearing slippers to work.

She confirmed what Channel 7’s Jules Vasquez mentioned to Hon. King at the press conference – that prior to this year’s general elections, workers were basically told to “vote [UDP] to save your job” – now, they won’t have a job anyway.

In reply to that, the Minister stated that “bigger repercussions” would have followed if they had tried to keep on these 200 workers without money to pay them, which they claim they don’t have.

Pending meetings to be held next week with technical staff from the Ministry, King had said on Friday, further announcements would be made on the progress and nature of the “scale down,” but the Government is essentially taking on the task of easing the transition of the workers to working in the private sector or providing other opportunities for the released workers.

While the second worker we spoke to also says she had no idea about any financial hardship hitting the program, she mentioned that she and other workers had been working one month in, one month out, for some time and prior to June of 2011, they were briefly not working at all.

Hon. King, she said, once visited their workplace and held a meeting where they were told that their jobs would not be cut, that their pay would be raised and they would be given the tools to do their work – but this was shortly before their pay was cut.

Now, she says, she must go out and look for something to replace this “end” and put her kids through school. She had been counting on the raise of pay and restoration to five-days-a-week work to build an addition to her house, but that is now on hold.

“It’s mostly single mothers working on this project. You can’t even see [the Government ministers] to ask for help now…meanwhile, they have the Gang Truce working, giving them money to buy more guns, more bullets to kill each other, while we single mothers are struggling…”

Other workers tell us they are bracing for the next flurry of termination letters that, they have been promised, are being readied for this week.

According to Petillo, she and other workers have been told by the Social Security Board (SSB) that they have no record of contributions on their behalf from the project, though their supervisors say those contributions were paid. At Friday’s press conference, King had mentioned that both their initial wage bill of $158,119.85 per week and the reduced bill of $109,011 included Social Security payments.

King maintained that he would not describe the workers as being “fired” or “terminated.” But he does admit that the programs as conceptualized did not have “direction,” and mentioned the Apprenticeship Program run by the Ministry of Education as an example of another direction in which the SRP could have gone.

Even though the United Democratic Party won 8 of 10 seats in the City in March’s general elections, including all six Southside Belize City seats (particularly King’s own constituency of Lake Independence, previously held by the PUP) on the back of its image as a “welfare government,” King said he did not see a tie with the end of the program to any backlash against the party at the polls, nor should a rise in crime be expected because more people are out on the streets seeking jobs. Unemployment was recently confirmed to be at 14.3% nationwide, the highest since 1998.

In September of 2011, the Gang Truce, funded by taxpayers’ money, was created specifically as a response to rising crime that had taken nearly 100 lives up to that point in the year; members of as many as 10 City gang groups were employed to clean up their area and basically not shoot each other and innocent citizens, in exchange for a stipend.

At their peak, some 240 persons were employed with the Truce and 584 with the SRP for a total of 824. That number was reduced to 729 by means of deaths, dropouts and otherwise, and the work week was reduced from five days to three, cutting payroll by about $40,000, but a project that was initially intended to last for just one year was extended to three and the funds, in the end, ran out.

On Friday, we asked why the Ministry did not go after the controversial Gang Truce, which King recently grandly renamed “Peace in Progress,” but which has been roundly criticized as appeasement of would-be criminals.

King’s response: “The concept of the original thought, with the Gang Truce, I think Belizeans thought that the gangs were just taking the Government for a ride and that basically, the media has ran with that far enough. I really and truly don’t like the name gang itself. I thought that we could’ve promoted peace because really and truly, what we wanted is for these guys to become more peaceful to society, so that was the concept that I was about to bring, with new direction to the program. If we are talking about scaling back the program, apparently it doesn’t look like we are going forward with it; does it?”

Nonetheless, the Ministry says it has sat down with private sector individuals to seek jobs for these persons, and will use other avenues to keep them occupied – and hopefully, happy enough in the near future.