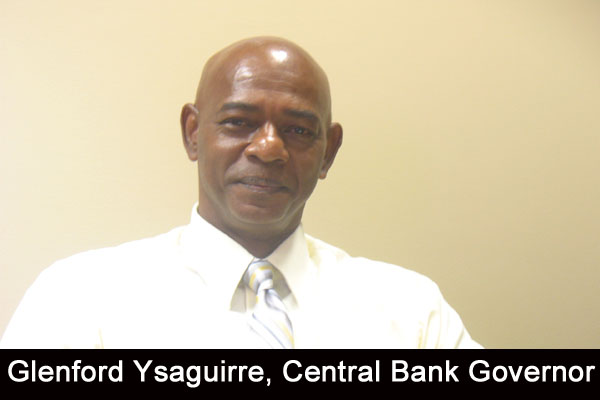 BELIZE CITY, Mon. July 4, 2016–Since last April, Belize’s financial sector has been hit by the loss of correspondent banking relations (CBR), and ties with the country’s Central Bank—which pays foreign providers for goods and services for the Government of Belize—have also been severed by two foreign banks—Commerzbank and Citibank, the latter taking action only weeks ago.

Last week, the IMF issued a discussion note captioned, The Withdrawal of Correspondent Banking Relationships [CBRs]: A Case for Policy Action. The report cites Belize as one of the jurisdictions where only a few CBR providers remain, and even the Central Bank faces difficulties maintaining correspondent banking relations (CBRs).

The IMF report said that “…the withdrawal of CBRs has reached a critical level in some affected countries, which can have a systemic impact if unaddressed.” It also added that, “Coordinated efforts by the public and private sectors are called for to mitigate the risk of financial exclusion and the potential negative impact on financial stability.”

According to the IMF, “Continued pressure on CBRs could potentially disrupt financial services and cross-border flows of money.”

Central Bank Governor, Glenford Ysaguirre, is more optimistic than the IMF. He said that the Central Bank still retains its relations with Bank of America and the US Federal Reserve.

Whereas there had been talk that the Central Bank could assist displaced bank clients whose financial service providers had been axed by foreign banks, Ysaguirre told us that it has never had to come to that.

In last week’s IMF note, the Fund noted that several banks have lost their CBRs. It added that, “Only two of the country’s nine domestic and international banks (representing 27 percent of the banking system’s assets at the end of March 2016) have managed to maintain CBRs with full banking services.”

We asked Ysaguirre whether those two banks are Atlantic Bank and Scotiabank, and he indicated that they are.

According to the IMF report, “Other banks have found alternative relationships with non-bank providers of payment services or through nesting arrangements.”

The report added that, “The Central Bank of Belize has also lost two of its CBRs. While the overall size of deposits and lending in the country has not been affected, international banks’ deposits have decreased significantly, with this decrease partly compensated by an increase in deposits in domestic banks. There has also been some displacement of customers toward the two banks that still have CBRs with full banking services.”

Over a year ago, at the Seventh Summit of the Americas held in Panama, Belize Prime Minister and Minister of Finance, Dean Barrow, said, “…even as we speak, there is a crisis in my own country and in several others in the Eastern Caribbean, where the big US banks are ‘de-risking’ by terminating their correspondent relationships with our domestic banks. Indeed, even our Central Banks are being cut off; and our financial and trade architecture cannot survive this phenomenon.”

Barrow made the remarks before Bank of America moved to sever relations with Belize’s largest domestic bank – the Belize Bank. De-risking had previously hit the offshore banks. Over the last year, other domestic banks as well as Belize’s Central Bank have been impacted.

Just over a month ago, in May 2016, the IMF issued its report on its annual consultation with Belize. In that report, the IMF said that “the challenges posed by loss of correspondent banking relationships with international banks have increased since the 2015 Article IV Consultation.”

We tried to get an update then from Ysaguirre on the present state of affairs, but he indicated to us that he was overseas.

In updating us today, Ysaguirre informed us that, “Not much has changed with regards to the banking system and CBR’s.”

He told us that he is not aware of any further loss by the domestic banks in Belize.

“You need to appreciate that the IMF is reporting on some dated information that the local press already knew. Also, as it relates to the CBB, the IMF can only report what we tell them. Anything else is speculation on their part,” remarked Ysaguirre.

According to the Governor, Commerzbank (a German bank which had been servicing Belize banks) had signaled in 2015 that they would exit all Belize relationships by April 2016—and they did.

“This was a little used account that was maintained as a backup. They claim that volumes were not significant enough to continue,” the Governor indicated.

He told us, though, that there has been no change with Bank of America so far in 2016.

The Governor said that all local banks in Belize have in place suitable credit card settlement arrangements, and some banks are utilizing payment institutions which are not banks for small value transfers.

For its part, he said, the Central Bank still uses Bank of America, as well as the US Federal Reserve for its transactions.

The problem of de-risking by foreign banks and the loss of correspondent banking relations in the Caribbean features high on the agenda of CARICOM Heads of Government meeting today through to Wednesday in Guyana.