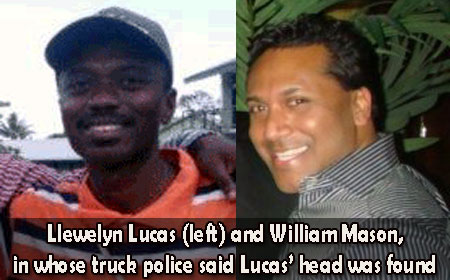 BELMOPAN, Cayo District, Mon. July 18, 2016–One of the most shocking murders to ever happen in the country came to light when police accidentally discovered the freshly severed head of a man, Pastor Llewellyn Lucas, 47, in the trunk of a pickup truck belonging to William Mason, a Guyanese national by birth, who goes by several aliases, including Rajesh/Ted/ Donny Ouellet, when they located and detained him in an investigation about another matter, a kidnapping.

Apart from reportedly holding a Canadian passport, Mason was, strangely, in June 2015, issued a birth certificate claiming that he was born in Crooked Tree, Belize District.

Lucas, on the other hand, popularly known as Pastor Lue, was a Dangriga-based pastor who died without any wife or children. He was a devoted Christian who had been especially critical of the LGBT agenda and had recently made some forays into politics.

Police, at a press conference today, Monday, which featured National Security Minister John Saldivar, Assistant Commissioner of Police Russell Blackett (and others), said that Mason was wanted by Belmopan CIB in connection with another ongoing investigation which featured the attempted kidnapping of a Canadian man and his wife that occurred almost two months ago in Cayo.

According to a police report, on Friday, July 15, sometime around 8:30 p.m., Mason was spotted at a bar in the Industrial Site area of Belmopan. Police immediately conducted a search on him, which led to the discovery of a .9mm pistol containing five live rounds of ammunition.

A press release of Sunday, July 17, 2016, said that “On Friday, July 15, 2016, at around 8:30 p.m., one William Mason who was sought by Belmopan CIB for the purpose of an ongoing investigation was spotted at a location in Belmopan. Police then visited the location where an Indian descent male person identified himself as William Mason. Police then conducted a search on him which led to the discovery of a .9mm pistol with 5 live rounds of ammunition.

“A further search was also conducted on his black Ford F150 [4-door] pickup truck without license plates, which was when Mason started behaving in a strange manner and started giving excuses that he could not locate his vehicle keys.

“As a result, a search was conducted in the pan of the vehicle, which resulted in the discovery of a black bucket containing a white sack with a freshly cut human head covered up with duct tape.

“The driver window of the truck was then broken and entry was gained into the vehicle, where police found a magazine containing four .9mm live rounds, a pump action shotgun and a pouch with 8 live cartridges of ammunition.

“The vehicle and Mason were then taken to the Belmopan Police Station as investigations continue.”

According to Acting Commissioner Blackett, by 4 a.m. Saturday, July 16, all of these persons were taken into custody.

Blackett told Amandala that thereafter, “an intensive search of his [Mason’s] farm situated on Mile 31 on the Philip Goldson Highway and his home on Intelco hill in Belmopan were searched simultaneously for any evidence we could find.”

On that farm, Blackett said, the burnt remains of what is believed to have been Lucas’ body were discovered and evidence has been collected for forensic testing.
“The investigation continues at his farm at this moment, where we are trying to recover the murder weapon, a knife that is in a 12-foot deep pool. We had asked the National Fire Service to assist us yesterday, but the tools could not bring up the muck, so we are asking another entity to assist us with a vacuum type truck and presently that is ongoing,” said Blackett.

However, the plot thickened after information came to light that Mason was “well-connected” to some ruling United Democratic Party ministers of government and sat on several boards, including that of the Ministry of Health, Agriculture and NEMO.

Several of the UDP’s high profile members had frequented Mason’s home, including the Minister of National Security, John Saldivar, who today claimed, “I don’t know who he is ‘well connected’ to, and I don’t know what you mean by ‘well connected.’ If you’re asking the question if I know Mr. Mason, obviously he is a resident of Belmopan and a businessman, and in terms of my direct involvement with him, at some point last year he had made some contributions to my football club, the Bandits, but that is the extent of it — I have not heard [from] or seen Mr. Mason since September last year; we do not, at this time, have this friendship.”

The Minister further claimed, “As soon as I found out from a source about his supposed background in other countries, I certainly decided for myself that this was not a good thing to have a relationship, or friendship with him.”

However, it appeared that Minister Saldivar also had a relationship with Lucas, the headless victim, who had resided in Belmopan. Lucas had challenged the UDP’s Frank “Papa” Mena and the PUP’s Anthony Sabal in the 2015 Dangriga by-election, and thereafter, offered himself as an independent candidate for Toledo East in the 2015 general elections.

Lucas’ last Facebook posts to Saldivar read, “I am asking you to assist me in helping my mother in the Sister Cecelia’s Home. She is not happy there and wants to come out. You were the one that made me purchase 13 Cayo Street for her, and she has the right to live there for as long as she wants.”

When asked why anyone would want Pastor Lucas dead, in so horrible a fashion, Blackett told us, “So far we understand there was some transaction going on between these people, and it appears there was a fallout. We are still trying to uncover the final analysis of this before we put it forward to the public, but I must assure you that whenever this is done, you will know the conclusive results.”

At this time, all five men believed to be involved in Lucas’ beheading are still in police custody.

Today, they were released and quickly re-arrested by Belmopan police. The Belmopan magistrate had ordered police to set free the men who had been initially charged for murder, kidnapping and conspiracy to kidnap.

However, after a brief period, police rearrested and detained the men who had momentarily exited the court through its rear end. Their lawyer, Herbert Panton, tonight told the media that a Belmopan magistrate had ordered the release of the detained men because they had not been provided with their disclosures.