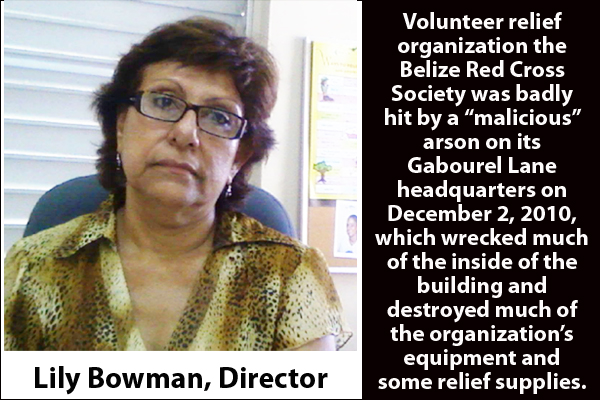 $35,000 in equipment and invaluable information lost

Volunteer relief organization the Belize Red Cross Society was badly hit by a “malicious” arson on its Gabourel Lane headquarters on December 2, 2010, which wrecked much of the inside of the building and destroyed much of the organization’s equipment and some relief supplies.

The Society has been able to rebuild, but burglars managed to defeat their security procedures and make off with $35,000 in invaluable equipment for the organization early Sunday morning, August 19.

The Police Department has yet to provide official details, but director of the Society, Lily Bowman, told us this afternoon that the security firm they hired after the 2010 arson, Elite Security, reported that they received an alarm at their headquarters around 2:55 a.m. Sunday, and called the police.

Apparently, the police responded and circled the area, but saw nothing obviously amiss, and none of the Red Cross staff was alerted.

In fact, the burglars had apparently broken in by climbing the radio tower at the back of the premises (the Red Cross’ communication system during emergencies), coming onto the roof, then hacking their way down through the ceiling into Bowman’s office at the rear of the building.

They also made a hole in the ceiling to break in to the disaster risk reduction management office next door and the finance office further down through a wall.

In all, the thieves got away with some $35,000 in office equipment – computer central processing units (CPU’s), monitors, hard drives, printers, six laptop computers, a fax machine, three radios and other various office materials. When we spoke to Mrs. Bowman in her office this afternoon, she could not even connect her standing fan to an outlet because the extension cord was stolen as well.

The burglars did not ransack or otherwise attack the main area of the office (which had been extensively damaged in the 2010 fire and now has burglar alarms and sensors), but according to Bowman, the computers contain valuable information on the work of the Society and are not easily replaceable.

According to Bowman, this is another in a series of incidents targeting the Red Cross since the December 2010 arson/fire. There were two unpublicized further attempts to burn down the building, both stopped by concerned citizens, and several attempts to burglarize the premises, none successful until Sunday.

Staff members are freshly demoralized and very aware of their vulnerability, said Bowman. She hopes that the authorities catch those who are responsible.