Belize air traffic control system to get an upgrade 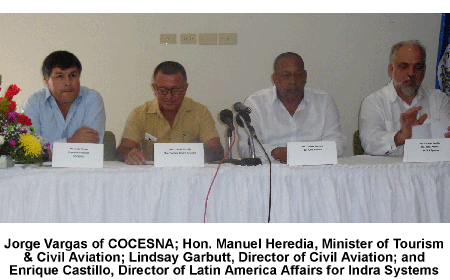 LADYVILLE, Belize District, Tues. Dec. 2, 2015–Today the Government of Belize signed a contract for the modernization of the Philip Goldson airport, which is being made possible through COCESNA (Central American Corporation for Air Navigation), of which Belize is a member. The upgrade will be done to the air traffic controls, the radar system and the meteorology services. On hand for the occasion were Jorge Vargas, executive president of COCESNA; Hon. Manuel Heredia, Minister of Tourism & Civil Aviation; Lindsay Garbutt, Director of Civil Aviation, and Enrique Castillo, Director of Latin America Affairs for Indra Systems.

Minister Heredia said in his address, “Today marks a very important day for civil aviation in Belize, because we will be signing a contract with Indra Systems, an international equipment supplier from Spain. The government of Belize and COCESNA are in the process of carrying out a 9.5 million dollar- project for a state of the art modernization of our air traffic control center, radar system, meteorological system and all other associated equipment of the air traffic control system.”

Lindsay Garbutt, Director of Civil Aviation, told the media that Belize and Costa Rica are the first recipients of the investment by COCESNA in the improvement of their air traffic controls, and this investment is something that will be made throughout the region. Garbutt pointed out that not only will the control systems be upgraded, but senior personnel will be sent to Spain to get training and to ensure that the system is compatible with what is already in place in order to optimize the functioning of Belize’s air traffic control.

Jorge Vargas, executive president of COCESNA, in his remarks said that their investment of approximately $14 million will mean that Belize will be able to meet the safety requirements for air traffic control.

Enrique Castillo, Director of Latin America Affairs for Indra Systems of Spain, in his address said that Belize will be one of the five countries in the world to have the latest technology in air traffic control. Castillo said that he was glad that they could upgrade a system that they had installed 10 years ago. Castillo expressed his appreciation to COCESNA for consistently utilizing their latest technology and making them available to all their member states.

Heredia added, “The modernization will immensely enhance the provisions of the air traffic services in Belize and is in line with the world’s huge technological advancements in air traffic management. Such service is provided in accordance with the national standards set out in Annex 2 of the Convention of International Civil Aviation, of which Belize is a contracted state.”