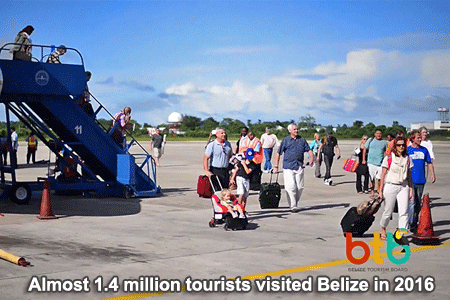 BELIZE CITY, Fri. Feb. 10, 2017 – – The Caribbean Tourism Organization (CTO) yesterday unveiled its report on the performance of the tourism sector across the Caribbean for 2016. The report said that while only 48% of the reporting destinations registered growth during the year, with the best performances occurring in the Dominican Republic, the British Virgin Islands and Grenada, which all grew by double digits, Belize became the 8th destination to record over one million cruise passenger visits that year.

The report added that Belize was actually one of 7 Caribbean destinations which recorded double digit increases within their reporting periods. The other countries in the group are the Turks & Caicos Islands, Bermuda, Antigua & Barbuda, Barbados, Grenada and Montserrat.

“Caribbean tourism continues to break new ground, surpassing 29 million arrivals for the first time in our history, and once again we have grown faster than the global average,” said Hugh Riley, CTO Secretary General.

The CTO reported that total visitor expenditure is estimated to have increased by approximately 3.5% to reach US$35.5 billion.
“Despite political uncertainties, security and economic challenges in our main source markets, tourist arrivals to the Caribbean increased by 4.2 per cent in 2016, better than the 3.9 per cent overall internationally,” Riley said.

As is the case for Belize, the United States continued to be the Caribbean’s primary long-stay market, increasing by three-and-a-half per cent and providing just about half of all arrivals, Riley added.

In dissecting the 2016 numbers, CTO’s Acting Director of Research, Ryan Skeete, said: “2016 marked another record-setting year as for the first time in our history we received over 29 million arrivals. This is also the 7th consecutive year of growth and our estimated 4.2% increase in tourism trips is the 3rd consecutive year above the global growth rate.”

A month ago the Belize Tourism Board reported that Belize was boasting its highest level of overnight arrivals in 20 years with a growth of 13%. Meanwhile, cruise tourist arrivals grew by 4.9% to over a million tourists.

“The contributing factors to these performances included greater air access from the source markets to the region and the realization of significant investments to enhance infrastructure (airport redevelopment) and product (hotels),” the CTO information said.

The report said that, “2016 was also a record-breaking year for Caribbean cruising, as cruise passenger arrivals to the region grew by about 1.3% to reach 26.3 million, in line with expectations at the beginning of 2016.”

The CTO said that the forecast is for tourist arrivals in the Caribbean to grow at a slower rate of between 2.5 and 3.5% in 2017.