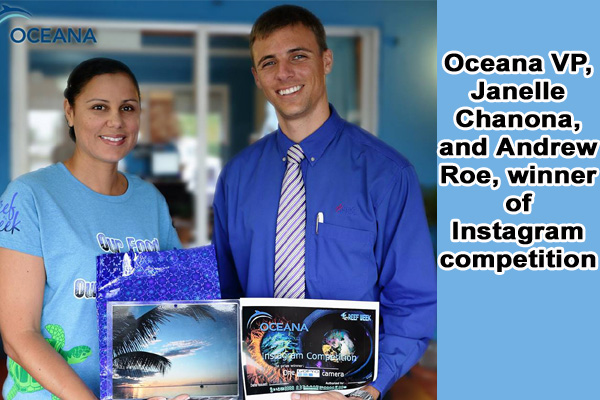 The largest international organization devoted solely to ocean conservation – Oceana – is working in Belize to protect the Barrier Reef from the potentially damaging effects of offshore oil drilling, and as part of that effort, Oceana in Belize has dedicated this week to highlighting one of our greatest natural wonders, The Belize Barrier Reef.

Although the 186-mile reef system is a spectacular sight and home to many rare species of aquatic creatures, it is increasingly threatened by overfishing, habitat destruction, pollution and climate change, and since 2009, Oceana in Belize has been helping to protect and preserve the second largest coral reef system in the world which stretches from the northeast tip of Mexico’s Yucatán Peninsula to Amatique Bay, Guatemala.

Today, Amandala spoke to Oceana in Belize’s Vice President, Janelle Chanona, and she explained that the 2nd Annual Reef Week is a chance for all Belizeans to acknowledge the value of our reef, while supporting efforts to protect and preserve its existence.

She said that the purpose of Reef Week is mainly to emphasize the contribution of the barrier reef and the marine species it houses to the economy of Belize, as well as to the livelihoods of countless Belizeans.

The initiative consists of a full week of activities aimed at honoring the existence and benefits of Belize’s reef as well as engaging everyone in being a part of the conservation efforts.

Last Sunday, there was a ‘Ride to the Reef’ bike ride in which 98 cyclists rode from the steps of the National Assembly in Belmopan to the BTL Park in Belize City. Chanona explained that the purpose was to physically ride from the Capital to the coast to emulate the way that toxic debris usually runs down through the river to the open sea and harm that environment.

Also on Sunday, there was a harbor regatta off the coast of Belize City in which young sailors got to sail small yachts in an effort to have them use the waters to have an enjoyable time and hopefully develop a personal connection with the sea.

When the regatta culminated, a Reef Fair was conducted at the BTL Park at which conservation groups, such as the Audubon Society, the Healthy Reefs Initiative, the Belize Coalition to Save Our Natural Heritage, and Oceana in conjunction with the Belize City Council and Grace Kennedy (Belize) Ltd., came together to do their part through educating interested persons about the different programs that are in place to safeguard the reef, for example the Climate Change program, and what they as individuals can do to about menaces that endanger the reef, such as the pervasive Lionfish.

Last night, a photograph competition was held in which photographers submitted pictures that show how the reef is connected to our daily lives via Instagram. The first place winner in that competition was Andrew Roe.

On Saturday, there will be a swim challenge in which swimmers will attempt a one and a half mile swim across the English Caye channel, and on Sunday evening all city residents are being invited out to the Belize City coastline to witness the Sea Carnival which will feature different boats parading along the coastline of the Old Capital from the Radisson Dock, passing the BTL Park, then going around to the Haulover Creek, then around to the Port of Belize, concluding back at the Radisson dock.

Chanona told us that it is important for Belizeans to protect, preserve and celebrate our reef because we as Belizeans need to do more than just say we have the second largest reef; rather she said that we need to keep abreast of exactly what’s happening with our reef and our marine resources so that we can have the reef and its multiplicity of marine life available for future generations.

Those who would like to become part of Oceana or its ‘Wavemakers’ volunteer group can either visit the office at 62 Bella Vista off the Philip Goldson Highway or go to Oceana’s Facebook page and sign up.