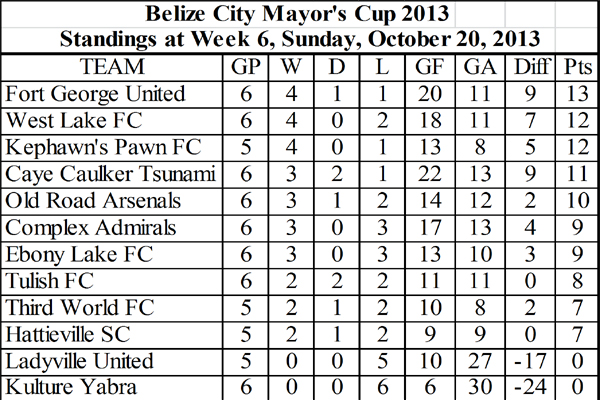 It’s shaping up to be a real tough race to the championship of the first ever Belize City Mayor’s Cup football tournament, as marathon champs West Lake is just 1 point behind league leaders Fort George United, and these two teams clash in the nightcap this Friday night in their only meeting in the competition, which follows the “La Liga” format – no playoffs.

The winner of the Belize City Mayor’s Cup will be the team that earns the most points from their 11 games played in the tournament, since there are 12 teams participating.

The race is hot, and we are just around the half-way point in the competition, which will run longer than 11 weeks due to the fact that Kephawn Pawn FC had briefly withdrawn, and then returned to the competition.

Week 6 began with 1 game only on Friday night, October 18, when Hattieville SC clipped Ladyville United, 3-2, with a goal apiece from Keithon Dyer, Roy Smith and Richard Usher. Both Ladyville goals were by David Ramos.

The opener on Saturday saw Complex Admirals trouncing the veterans of Kulture Yabra, 7-0, with John Grinage netting a hat trick (3 goals), while Jamal Ford, Carlos Ardo, Andrew Lamb and Hubert Baptist scored a goal each for the winners. The nightcap was a 2-2 draw between Old Road Arsenal and Tulish FC. Charles Cantun and Delwin Jones shook the net for Old Road, while Marlon Gutierrez and Dale Perez hit the target for Tulish.

Sunday’s much anticipated opener saw a return to action of veteran all-Belize goalie Charlie Slusher, who started between the sticks for Fort George United; but Charlie quickly ran afoul of referee Fahreed Ahmad, who ended up ejecting Charlie after a controversial exchange. Fort George suffered 2 other ejections in the game, but somehow managed to hold on for a 3-3 draw against Caye Caulker Tsunami. Clinton Gill, Francisco Briceno and Bruce Carillo scored for Fort George; while Brian Martinez, George Barrera and Ernest Flores tallied for Tsunami. In game 2, Kephawn’s Pawn FC clipped Ebony Lake, 1-0, on a goal by Dalton Cayetano. And in the nightcap, West Lake served notice that they will be in the run for the championship when they stopped Third World, 3-1, with a goal each from Michael Hernandez, Wayne Miller and David “Dav” McCaulay, Jr. Third World got their only goal from Whitfield “Chilo” Patnett.

There is reportedly a Mayor’s Cup Discipline Committee meeting tonight that is considering an appeal by Fort George United FC against the red card issued to goalkeeper Charlie Slusher on the grounds that the referee erred in physically touching Charlie when trying to apply his yellow card sanction, which precipitated the reaction that resulted in the red card. If they win the appeal, Charlie could be in goal tomorrow for Fort George against West Lake.