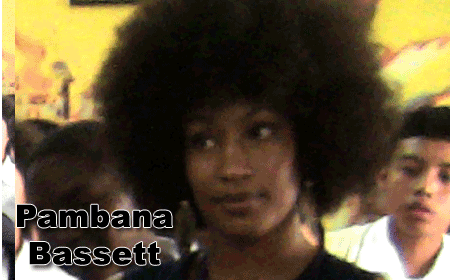 This Sunday, the 25th of June, a delegation of six people from Belize will travel to the Caribbean coast of Honduras where they will participate in an organized exchange focused on the Garifuna struggles and victories for collective territories, reparations and ancestral rights. Belize delegates include community members from the Garifuna coast of Yugadan/Hopkins; the communally-held lands of St. Vincent Block/Serru/Cerro in Peini; the Rastafari-led multi-ethnic land reclamation efforts of Harmonyville in Cayo; and from the Black-owned independent media house Kremandala in Belize City.

People-to-people visits have taken place between Belizean and Honduran peoples across maritime borders for centuries and today, cultural and social exchanges are constant. In recent years, organized convergences have focused primarily on groups sharing stories and specific strategies to protect the rights of Black and Indigenous peoples.

This June’s exchange has been coordinated by Witness for Peace (WFP), a US-based longtime Latin America and Caribbean solidarity organization. WFP’s regularly hosts delegations across the Americas and describes them as an opportunity to “meet with leading experts on policy issues, learn from activists working for peace and spend extended time in communities working for justice.”

The twelve day- long event is entitled, “Honduras: The Fight for Reparations,” and was planned with the guidance of the Black Fraternal Organization of Honduras (OFRANEH) by WFP team members who work closely in solidarity with the Honduran social movement.

International solidarity plays a critical role in Honduras as human rights defenders face extreme violence following the 2009 coup that ousted the democratically-elected President Zelaya and increased militarization and violent land grabs. This 28th of June marks the eight year anniversary of the coup which was supported by the Obama administration and then US Secretary of State Hillary Clinton. The coup was a pivotal moment in the Honduran social and economic timeline and landscape; it was an undemocratic and state-sponsored attempt to halt the achievements of the Honduran popular movement which had recently succeeded in doubling the minimum wage, small land reform and proposing a referendum for a constituent assembly. Such an assembly would allow the Honduran people to rewrite their constitution to better protect the rights of the working class and campesino majority. The coup put an end to many of these social changes and the state has since grown its police and military force exponentially while looting the public coffers intended for social spending on health, education and housing.

Before and since the coup, OFRANEH has been a leader in the Honduran social movement and the fight for ancestral territories from the depths of the seas and up to the stars. The Garifuna organization was founded in 1978 in defense of communal lands and a life of dignity for their people. It continues to do so under the leadership of Miriam Miranda. OFRANEH denounces neoliberal megaprojects such as hydroelectric dams, agribusiness, megatourism, model or charter cities and other multinational-led efforts to displace their peoples for the benefit of the local and foreign elite. Working across the forty seven Garifuna communities along the northern coast of Honduras, OFRANEH leads the struggle for land, reparations, autonomy, recuperation of ancestral practice and spirituality, community-based radio and alternative media, farming, fishing, education and other visions for life rooted in Garifuna cosmovisions; their leadership is largely made up of youth and women.

In 2015, OFRANEH set a legal precedent for Black and Indigenous peoples with two victories in the international court system. After decades of using the courts as one tool in the fight, the Inter American Court of Human Rights finally confirmed the inherent rights of Punta Piedra and Triunfo de la Cruz and mandated that the Honduran state recognize the communally-held ancestral lands of the Garifuna communities; the state was ordered to pay cash restitution for having violated these rights. In Belize, the Maya Lands Rights Case also set legal precedent in the international court system in 2015 after years of having done so in Belize’s national courts. The Caribbean Court of Justice reaffirmed the rights of the 38 Mayan communities to collectively-held territories and ordered the Belizean state to pay reparations after repeatedly colluding with multinational corporations in violation of these rights.

In recognition of the importance of Belize-Honduras grassroots exchanges, WFP has greatly subsidized the delegation cost for travel, lodging, training, language interpretation and more. Even so, the cost for grassroots participation is a challenge. If persons or organizations are interested and able to make a contribution towards the costs they can call 671-8050 or email [email protected]