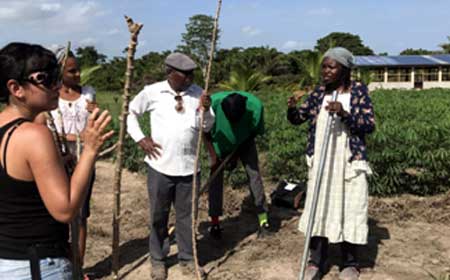 Six delegates from Belize visited Garifuna communities on the frontlines of Black and Indigenous territorial defense along the Caribbean coast of Honduras from the 24th of June to the 6th of July 2017. Delegates gathered with the Fraternal Black Organization of Honduras (OFRANEH), founded in 1978, an organization encompassing 46 Garifuna communities along the Honduran Caribbean coastline. OFRANEH’s members and leadership gave presentations, held discussions about their organizational work and invited delegates to work the land.

Honduras: The Fight for Reparations, was facilitated by Witness for Peace, a longtime Caribbean and Latin American solidarity organization. Ofraneh organized the delegation throughout their communities as they seek to share accounts of their victories in defense of Garifuna territories, their challenges and strategies to support the struggle for land and justice.

Leaders from the two communities that won the 2015 court case against the state of Honduras for land and reparations for violating their rights (Punta Piedra in the department of Colon and Triunfo de la Cruz in the department of Atlantida) shared their monumental victories for reparations and their ancestral Garifuna struggle. The two communities won reparations through a legal battle they waged against the state of Honduras for violating their Indigenous rights and territorial claims through the Inter-American Court of Human Rights (IACHR). In December 2015, the international court issued sentences in favor of the two communities, mandating the return and demarcation of their ancestral lands and a $1.5 million settlement for each community.

OFRANEH’s other organizing initiatives include recuperating lands stolen by multinationals for mega-projects; denouncing elite-controlled drug trafficking; broadcasting Garifuna history and struggle through community radio stations that speak truth and counter lies told by corporate media; rejecting hundreds of mining and dam concessions and unconsented oil exploration granted to big businesses; speaking out against militarization and the illegal selling of Garifuna coastal lands for foreign-owned tourist projects; calling out land thefts particularly after the 2009 US-backed coup; continuing the decades-long fight for intercultural bilingual education rooted in Garifuna language and cosmo-vision; advancing ancestral farming initiatives that are women-led; pursuing the legal defense of collectively titled land and the right to the sea, and much more. Garifuna leaders representing different generations shared testimonies about their fight for land and reparations, as they confront incredible state-sponsored and indiscriminate violence as defenders of their inherent collective Indigenous rights.

In Triunfo de la Cruz the members of OFRANEH stressed the importance of spirituality as they organize despite great state and corporate threats. They expressed their belief that they are accompanied by their Garinagu ancestors in their fight to reclaim collective ways of living in the territories where those before them had lived, dreamed, worked and been laid to rest. 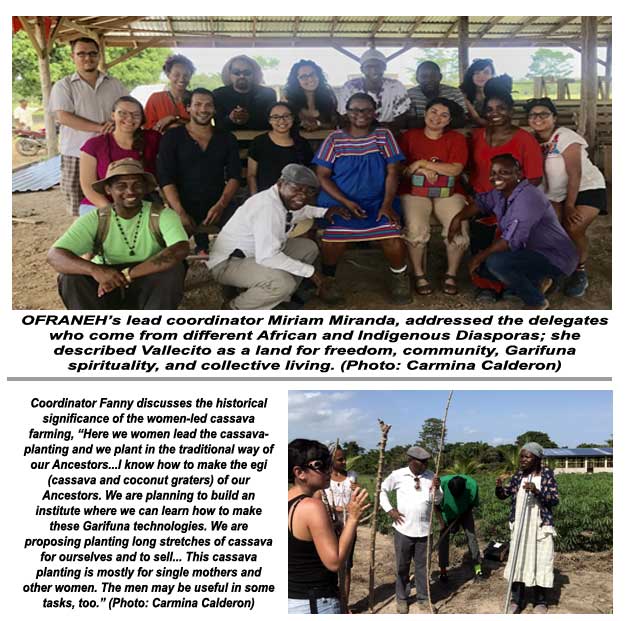 OFRANEH’s lead coordinator, Miriam Miranda, framed the social and historical context of the delegation by welcoming the delegates “from the people’s’ Diasporas”. Miranda greeted the 17 delegates in Vallecito, a recently recuperated Garifuna territory with sacred significance for the Garifuna people. Miranda remarked that although it is typical for Garinagu from Belize and Honduras to visit each other, that the participation of three Garinagu from Balisi (Belize in Garifuna) was of particular importance given the focus on ancestral land defense, grassroots organizing and reparations.

After Miranda spent the morning planting coconuts and before she travelled to the country’s capital of Tegucigalpa to serve as a key mediator accompanying the public university students at the National Autonomous University of Honduras (UNAH) in their massive year-long protests against privatization, Miranda outlined the challenges facing Garifuna communities. She emphasized the dangerous realities they are fighting to change: forced migration and displacement, institutionalized loss of language, targeted kidnappings, political persecution, state criminalization and assassinations.

Miranda explained the struggle against voracious capitalism and for territorial rights poignantly: “In this work there is no rest, not even at night. It is always working with others, for others. It is work for life and livelihood, it is a work for the future.” Inviting the delegates to take deep breaths and to enjoy the air, soil and spirit of the tierra prometida, or the promised land, Miranda detailed the history of Vallecito, recuperated Garifuna coastal land that is at the heart of their territorial struggle. Vallecito had been stolen from the Garinagu for decades by drug traffickers and armed actors for decades. These lands were now— after court cases, marches and drumming for protection— in the hands of the people for the collective well-being or buen vivir.

Similar to the vision of other Black and Indigenous maroon societies in history that escaped from enslavement and built new societies rooted in community, Miranda described Vallecito as a place of freedom. And, like those same maroon communities, OFRANEH will continue to struggle against systems of oppression. They invite all those with the same conviction to self-liberate and to Vallecito, to learn and to join in building together. Members from the 46 Garifuna communities along the coast visit the land to farm, observe ancestral spiritual practice, to celebrate and to gather in the annual asamblea (Spanish word for assembly) during which over one thousand Garinagu have strategized and made decisions collectively.

Belizean delegates joined organizers engaged in the movement for Black lives, Indigenous and feminist movements, alternative media, urban land defense, anti-militarism and anti-United States imperialism and other popular movement struggles throughout the Americas including in Ecuador, Peru and Black and Brown communities across the USA. Combating the media silence on the Garifuna struggle in defense of collective territory, the Belize delegates learned more about OFRANEH’s decades-long process to defend their peoples’ rights and to ensure life with dignity.

Two representatives from Belize’s Yugada/Hopkins coast, Baba Felix Miranda and Uwahnie Martinez, saw this opportunity to meet with Garinagu across the sea as a chance to share strategies of land recuperation and community-led projects. Their analysis of the conditions in which Garinagu live in Belize in some ways echoed that of the Garinagu in Honduras. In Belize there exist historical and ongoing institutionalized cultural and racial discrimination, impoverishment and disinvestment, large out-migration and immense pressures from foreigners and the local elite to sell ancestral Garifuna lands. Delegates explained how across the coast of southern Belize, the sea and beachfront are increasingly privatized and in the hands of non-Garinagu. They exchanged ideas and were inspired by OFRANEH’s current work as well as their long-term plans for consultation, community wellbeing and livelihood.

Garifuna farmer from Serru/St. Vincent Block/Cerro, communally-held property outside of Peini/Punta Gorda, Glen “Ukombozi” Martinez Logan returned to Vallecito where he commended the thoughtfulness and speed at which the Garifuna community is building, having visited during a large gathering two years ago.

Delegates from OFRANEH’s youth group NANIGU and women’s group OLAMUGAH had visited the Garifuna communal property in southern Belize two years ago to assist in building a community center in Cerro that was later torn down with the tacit support of a small group of Garifuna elite. Martinez Logan was impressed by OFRANEH’s focus on food sovereignty and the clarity with which they organize across the entire coast in defense of territorial rights despite clear attempts by the powerful to divide their communities.

A representative from Belize Grassroots Youth Empowerment Association (BGYEA), David “Ras Barno” Barnett, shared some of their experiences as a Rastafari-led and multi-ethnic effort to reclaim “land for the needy, not the greedy” and the challenges they have faced in attempting to address landlessness in Belize.

OFRANEH’s coordinator of the Garifuna Rastas shared with the delegation the importance of connecting their worldview and connection to Africa to the defense of their ancestral lands in the Caribbean. As an organization, OFRANEH shared how they too work alongside many other Black and Indigenous groups in pursuit of similar goals of autonomy and reparations in an effort to support each other in their quest for a more equitable world.
A Belize-City based community worker and grassroots journalist, YaYa Marin Coleman, identified with OFRANEH’s focus on education as central to movement work and reparatory justice. Coordinators repeatedly pointed to the failures of the existing colonial education system, and the successes of Garifuna community-led education rooted in their ancestral worldview.

It was apparent that OFRANEH, which works alongside various coordinators and agronomists in Vallecito, organizes with deep love and respect for the earth and the people, and that they do so with great urgency and at great risk. Coordinator Fanny described the critical importance of the women-led cassava project in rescuing ancestral practices like the elaboration of ereba. She explained that these projects are serious because they are projects for life. Their purpose is to ensure that everyone, especially single mothers and families, have what they need to be healthy and well.

Cesar Geovany Bernardez, OFRANEH leader and Garifuna correspondent with internationally acclaimed Radio Progreso, was recently targeted by the state with arrest for defending ancestral rights. He explained, “We have to work from the base, so that our people can become conscious. We are all necessary and it is money that has divided us. One has to learn and teach the old ways. Through the work with Vallecito, I can now plant, it makes me feel useful. It makes me want to stay. Vallecito is a legacy, we have to leave something after us with the children. We are creating the future and the present…We will defend it with our lives.”

In part 2 of Belize Delegation to Honduras Garifuna Territorial Defense, we will share more details about the legal land rights cases won and on-the-ground testimonies from Punta Piedra and Triunfo de la Cruz, the Garifuna Hospital in Ciriboya, and connections to the realities and grassroots struggles in Belize.