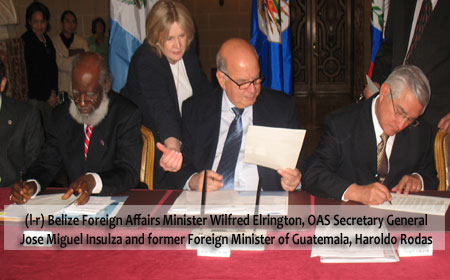 BELIZE CITY, Fri. May 8, 2015–There has been talk of the possibility of Belize and Guatemala going to the polls this September on the question of whether the unfounded territorial claim by our western neighbor should be submitted for a final and binding decision at the International Court of Justice (ICJ).

However, Belize Foreign Minister, Wilfred “Sedi” Elrington told Amandala today that Belize is not yet ready for the referendum, but that Guatemala has proposed an amendment to the 2008 special agreement which would allow that country to proceed with putting the question to a national referendum this November.

The Government of Belize has agreed, and Elrington is due to travel to Guatemala for the May 25 signing of the amendment to the ICJ special agreement. He said that the outgoing OAS Secretary General, Jose Miguel Insulza, will also travel to Guatemala to witness the signing, which will incidentally happen the day before Insulza formally demits office at the end of his two-term tenure.

The new OAS Secretary General, Luis Almagro of Uruguay, is also planning on meeting the delegations in Guatemala about the ICJ amendment.

Article 7.2 of the original ICJ agreement calls for both countries to hold simultaneous referenda on a date to be agreed by the parties. That vote was previously scheduled for October 6, 2013, but Guatemala backed out before it could be held. Guatemala now wants the vote to coincide with its second round of voting for president, expected to be held this November.

The Opposition People’s United Party this week proposed that the ICJ referendum be held along with Belize’s next general elections, due in 2017, but Elrington told us that the Barrow administration does not plan on doing so.

Elrington told us that he would have no difficulty considering the proposition of the Opposition to hold the referendum along with general elections if the Opposition would take a principled and responsible position on the issue.

He said that the new position of the People’s United Party, to encourage a “no” vote on the ICJ, is a 180-degree turn from the position the PUP had always articulated.