Belize gets highest rating from Expats 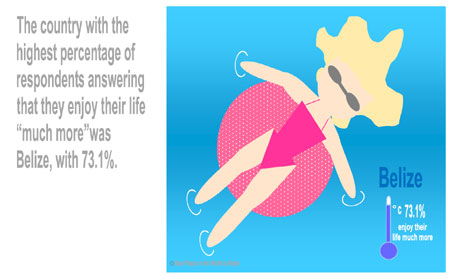 BELIZE CITY, Mon. July 13, 2015–A 2015 study titled, Expats: Expectation & Reality – A research Study of Expats Living in Belize, Nicaragua and Panama, reports that the country in which the highest percentage of expatriate respondents indicated that they enjoy their life “much more” was Belize, with 73.1%.

The report said that the study, released on July 6, 2015, was compiled by Best Places in the World to Retire, funded and run by an experienced group of entrepreneurs and investors based primarily in Southern Arizona, and that it garnered responses from over 400 expats, who provided more than 14,700 answers and thousands of comments.

“The achievement of getting a fresh start was cited by 38.2% of our respondents who moved to Belize, but only by 28.4% of those who moved to Panama and 24.7% of those who moved to Nicaragua. Be warned, however: in our interviews with expats living in Belize, many have cautioned against coming to Belize in order to disappear or hide. You can begin a brand new life in the land of jaguars and black orchids, but in doing so you can’t escape from the long arm of the law,” the report said.

An American married woman in the 45-64 age group who has been living in Belize for more than 10 years said: “My first months in Belize [were] the adventure that I anticipated but [I settled] into the reality and value of a life that is not cluttered, doesn’t have movie theaters (although I see everything on DVD just the same), doesn’t have shopping malls, doesn’t have a Black Friday (which I never participated in anyway), but offered a life that was slower paced.”

“The value of your time, getting to actually know people is out of the days of the 1950s to share free time together, helping people you know, experiencing the native culture [of people] who are absolutely some of the friendliest people on earth and they will take you in like you are a part of their life if you let them,” she added.

Belize’s health care exceeded the expectation of expats. The report said that the reality of the health care in Belize was a whopping 457.8% better than the expats’ expectations (64.7% to 11.6%).

“The single biggest complaint our respondents had about moving overseas: they miss the shopping (and men miss it al-most as much as women),” it also said.

According to the study, 82% of people move overseas in order to achieve a simpler, less stressful life, almost the same percentage who move overseas in order to lower their cost of living. This was true for 87% of the expats interviewed from Belize, while 85.5% moved because they wanted a lower cost of living and also better weather. For 49.3% of respondents from Belize, they found life to be much better than expected, 19.4% said a little better than expected, and 25.4% said it met their expectations. Only 6% said it was worse than they had expected.

“Contrary to the 20.8% of expats who expressed a fear of lack of safety, when their ‘boots were on the ground’, they realized their fears about safety were for naught, coming in at measly 3.4% reality,” the report said.