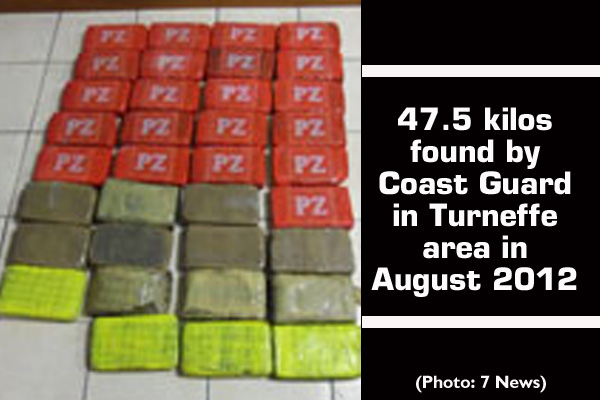 “Drug trafficking and drug-related violence continue to rise in 2012, threatening the security of Belizean citizens and the integrity of the country’s borders. These threats will continue if more serious measures are not taken by Belize’s government.”

The listing follows a September 14, 2012, presidential determination issued by the White House in Washington, which stated that “…countries listed as major drug transit and/or major illicit drug producing countries is not necessarily an adverse reflection of its government’s counternarcotics efforts or level of cooperation with the United States, but reflects the combination of geographic, commercial, and economic factors that allow drugs to transit or be produced, even if a government has carried out the most assiduous narcotics control law enforcement measures.”

The report said that “…trafficking organizations are increasing their use of Belize as an air trafficking route.”

It goes on to caution that “Drug trafficking and drug-related violence continue to rise in 2012, threatening the security of Belizean citizens and the integrity of the country’s borders. These threats will continue if more serious measures are not taken by Belize’s government.”

According to the US State Department, “The 2013 International Narcotics Control Strategy Report (INCSR) is an annual report by the Department of State to Congress prepared in accordance with the Foreign Assistance Act. It describes the efforts of key countries to attack all aspects of the international drug trade in Calendar Year 2012.”

The report was published in two volumes: the first covers drug and chemical control activities, whereas the second covers money laundering and financial crimes.

The report explained that “A major money laundering country is defined by statute as one ‘whose financial institutions engage in currency transactions involving significant amounts of proceeds from international narcotics trafficking.’”

It goes on to note, though, that “…the complex nature of money laundering transactions today makes it difficult in many cases to distinguish the proceeds of narcotics trafficking from the proceeds of other serious crime.”

“As Belize is a transshipment point for marijuana and cocaine, there are strong indications that money laundering proceeds are increasingly related to local drug trafficking organizations and organized criminal groups involved in the trafficking of illegal narcotics, psychotropic substances, and chemical precursors,” the report said.

The 2013 narcotics report said that in 2012, Belizean authorities seized and destroyed 19.1 metric tons (MT) of marijuana, 156 MT of precursor chemicals, 55.4 kilograms (kg) of cocaine, 1.4 kg of crack cocaine and 4.9 kg of crystal methamphetamine. Belizean authorities also recovered an additional 59.5 kg of cocaine that was found abandoned, leading to no arrests (classified separately from seizures in Belize).

It said that Belize is a major transshipment country for cocaine and precursor chemicals used in the production of synthetic drugs.

“Due to its position along the Central American isthmus, Belize is susceptible to the transshipment of cocaine between drug producing countries in South America and the United States, as well as chemicals bound for processing into finished drugs in Mexico,” said the report.

According to the US State Department, more than 80% of the primary flow of the cocaine trafficked to the United States first transited through the Central American corridor in 2012.

As for Belize, it said that “Large stretches of remote, unpopulated jungles on its borders with Guatemala allow smuggling of cannabis and synthetic drugs. A relatively unpatrolled coastline including hundreds of small islands and atolls make maritime drug interdiction difficult.”

It went on to note that, “Belize is bordered by countries where the drug trade is controlled by organized and violent drug cartels.”

According to the 2013 narcotics report, “Belize’s overall counternarcotics efforts suffer deficiencies in intelligence gathering, analysis, and capacity of the judicial sector, in addition to corruption and inadequate political will.”

The report notes that, “Citizen security deteriorated countrywide in 2012. There were 145 homicides over the course of the year, surpassing Belize’s all-time high of 129 in 2010.”