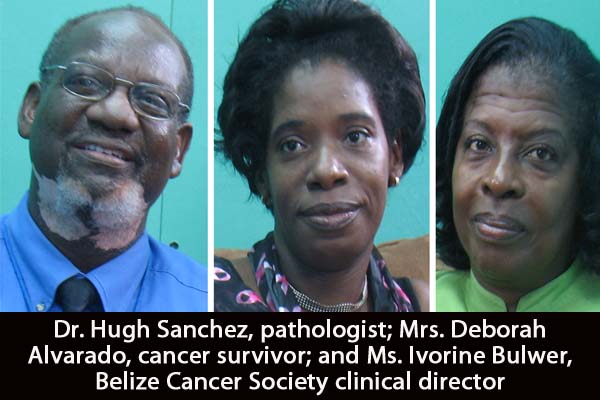 October is being celebrated as Breast Cancer Awareness Month—and it is fitting time for the Belize Cancer Society to sound the alarm, since Belizean pathologist Dr. Hugh Sanchez has indicated that whereas breast cases have been second in frequency to cervical cancer cases in Belize, the data up to September 2012 indicate that breast cancer could clock in as the most common cancer in Belize among women.

For the years 2009 to 2011, Belize saw 15 breast cancer cases recorded each year at the Central Medical Laboratory, which tracks both private and public sector cases in the country. However, Sanchez indicated that for the year 2012 to date, that number is about 13.

The Belize Cancer Society is stressing early detection as key. Breast self-exams (BSE), clinical breast exams by a medical professional, and screening mammography for those who have turned 40 or ultrasounds for those who are younger, are the essential methods used in Belize for screening.

Breast cancer survivor Deborah Alvarado said that it was the late Juliet Soberanis, founder of the Society, who warned her that the abnormalities in her breast were a signal that she was suffering from breast cancer. Alvarado said that one of her breasts was growing and it oozed blood from the nipple when she slept at night. The lab tests later confirmed this and Alvarado agreed to have the affected breast removed. The then mother of 5 (with 4 other dependents to care for) was diagnosed in 1997 at the age of 27. Today, she still has to be vigilant just in case the cancer returns.

Data provided by Sanchez indicate that the age range of those who have been diagnosed with breast cancer is 23 to 97. The average age of a breast cancer patient today is about 65, past the usual age of menopause. Since 1993, almost 180 breast cancer cases have been reported. A few men have also showed up with the condition—regrettably at the later stages, where it is much harder to treat.