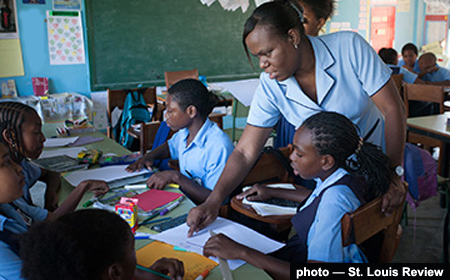 BELIZE CITY–Education and culture delegations from Central American countries which are member states of the Central American Integration System (Sistema de la Integración Centroamericana — SICA in Spanish) met in Belize last week to discuss, among other things, a new Central America Education Policy, approved by Heads of Governments of the region, as officials begin to chart the way forward for the policy’s implementation.

Education Minister Patrick Faber chaired the education sessions, as well as a joint session on culture with Tourism and Culture Minister Manuel Heredia.

According to Minister Faber, the policy aligns perfectly with Belize’s national stance on education in key areas such as teacher training, early childhood education, the teaching of English and Spanish, and the expansion of educational opportunities in the region.

Faber told us that there is nothing contained in the policy objectives that is outside what Belize has been doing in education.

The SICA countries met from Thursday to Saturday on San Pedro. Faber said that one of the main topics discussed on Saturday was the number of contact hours in the classroom, and it became evident that Belizean students have less of such hours than students in neighboring countries.

“I’ll tell people that Belize has one of the lowest numbers of contact hours, I think we have 180 [days a year], while you have other countries in the region that have up to 225 [days a year], I think,” the minister said.

“There was mention of Japan, but Japan is of course not in our region, with 240 contact days. I am saying this because it is now incumbent on us to do better. 180 contact days is by far too small; you see our struggles in mathematics and so on and I have to agree with the move in the region to improve on contact hours,” Faber added.

He said that the ministry will have to look at lengthening the numbers of hours that students have in the classroom, and also the amount of hours of contact that teachers have with children.

Kathleen Flowers, president of the Belize Nationals Teachers’ Union (BNTU), told Amandala when we contacted her for her feedback today on the minister’s announcement, that they have heard it said before that the contact hours for Belize students is among the lowest, but she said that this is something that should be discussed among all stakeholders.

“I can’t think that teachers would be against having more contact hours, especially if it will lead to better delivery, but it has to be something that is worked out in alignment with education rules and the education sector strategy,” Flowers said.

She said that the effort has to be a comprehensive one from all stakeholders, and they will also have to talk about how they will balance the equation to consider remuneration that will be required for additional contact hours. She pointed out that currently, many teachers give extra classes to students and some teachers don’t even get vacation time because of the need to do extra. However, they do not get paid for those extra hours

“We have to put this on the table as one of the issues to be deal with post-haste, since [the minister] has said it publicly. We want to look, as an organization, to see what input they will have in it, and how to develop the plans going forward,” Flowers told us.

BELIZE CITY, Mon. Oct. 26, 2020-- Of the 28 prisoners who escaped from the Belize Central Prison on October 12, five escapees remain on...
Read more
Highlights

BELIZE CITY, Mon. Oct. 26, 2020-- Police are reporting that over 100 persons were arrested and charged over this past weekend for attending restricted...
Read more
General

BELIZE CITY, Mon. Oct. 26, 2020-- Talks began between Belize and Guatemala from way back in 2004 for a Partial Scope trade agreement, which...
Read more
- Advertisment -