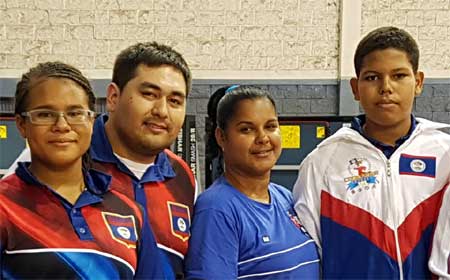 BELIZE CITY, Tue. Aug. 8, 2017–Belize participated (for the third time) in the 2017 Central American Pre-Infantile U-13 & U-11 Table Tennis Championships, which took place in Tegucigalpa, Honduras from August 3rd to the 6th. Seven (7) countries participated in this event, including Mexico, Guatemala, Belize, El Salvador, Panama, Costa Rica and Honduras. Teams were comprised of two players each, and each country could register up to two teams (with the exception of the host country, Honduras, who were allowed four).

The Belize delegation comprised of seven players, including two male teams and, for the first time, a female team as well. These were: Taye Parkinson and Devesh Hukmani (both age 12) for Male Team A, Jofny Paguaga (age 12) and Goran Gabourel (age 13) for Male Team B, and Gabrielle Gabourel and Abigail Thurton (both age 12) for Girls Team A. One other female, Sarai Paguaga (age 10) also participated in the Mixed Doubles and Singles events.

In the Male Doubles event, Male Team A, Taye Parkinson and Devesh Hukmani defeated Honduras (3-0) and Costa Rica (3-2), before losing (2-3) to Guatemala in the semifinals, to settle for the Bronze Medal in this event. Male Team B, Goran Gabourel/Jofny Paguaga was eliminated after defeating Honduras B (3-0), but losing to Mexico A and El Salvador A (0-3).

In the Female Doubles event, Abigail Thurton/Gabrielle Gabourel lost to Costa Rica A, Mexico A and Guatemala B (0-3). 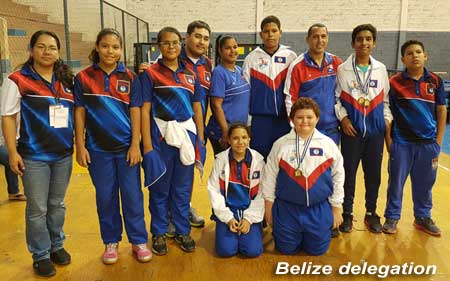 Belize had three teams in the Mixed Doubles event, which also utilized a straight knockout format. Taye Parkinson/Abigail Thurton won (3-0) over El Salvador, but lost (1-3) to Costa Rica in a rematch of the 2016 CODICADER U-12 Games. Devesh Hukmani/Gabrielle Gabourel won a close match (3-2) over Costa Rica, but then lost (1-3) to El Salvador. Jofny Paguaga/Sarai Paguaga did not make it past the first round, losing (0-3) to Mexico.

In the Singles event, which began with a round-robin portion, all our players participated, being placed into separate groups.

In the end, three of our athletes qualified for the last day’s event. These were Taye Parkinson and Devesh Hukmani of the U-13 category, and Sarai Paguaga of the U-11 category.

Sarai lost (0-3) to Mexico. Taye lost (1-3) to Mexico. And Devesh played an amazing game, winning (3-2) over his Costa Rican opponent; then defeated Mexico (3-0); but lost in the semifinals (0-3) to another Mexican opponent, thus settling for a Bronze medal.

For the Belize Table Tennis Association’s (BTTA’s) third international pre-infantile event, our juniors have done exceptionally well, with all the other countries from the region acknowledging and encouraging our continued participation at the event…

The BTTA would like to thank the Belize Olympic Committee for its support; the junior players and their parents for their commitment and hard work; our coaches, Wilber Tito Bientz, Juana Barbara and Gabriel Guerrero for preparing the juniors leading up to the event, and for working with them as coaches during the event; to Manuel Paguaga, who was our doctor on site at the event; and all others who contributed towards making this event a successful one. We’d also like to give a special Thank You to Willy Chang, Dr. Hidalgo and the other contributing doctors of Belize Health Care Partners (BHCP), Anthony Thurton and Associates, and the Gabourel and Paguaga families for making the girls delegation a reality. Without their support this trip would have not been possible.

(Amandala Sports Ed. Note: The above release has been significantly edited/abbreviated. Check the BTTA website: http://belizetabletennis.com for the full report.)