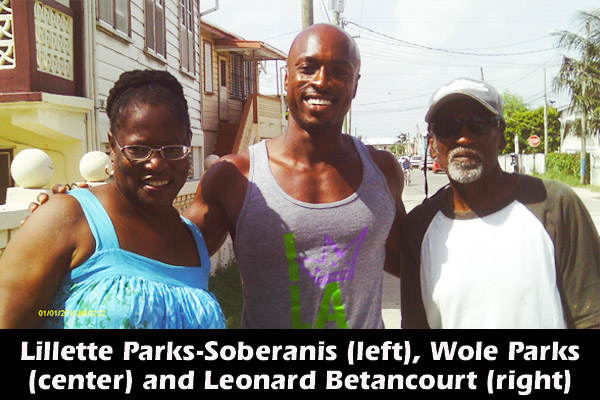 They could possibly be considered ‘diamonds in the dirt’, as most of us would agree that Belize is critically lacking serious Afro-American investors who are willing to ‘put their money where their mouth is’. Mrs. Lillette Parks-Soberanis and her brother, Eric Parks, are an exemplary part of the Belizean diaspora.

While other financially sound Belizeans choose to invest otherwise, these Belizean-American siblings opted to invest in a project that is guaranteed to stimulate jobs and ensure peak returns at the same time. Their mammoth investment currently lies in a 4-storey apartment complex situated on Vernon Street, one of Belize City’s main thoroughfares.

Today, Amandala spoke with Lillette Parks-Soberanis, an upbeat 65-year old retired Belizean-American teacher, originally from George Street on Southside Belize City, who is of the opinion that “age has nothing [to] do with effort.” She told us that since retiring, she has returned home to the Jewel with many small initiatives in mind.

When questioned about the grand edifice in the Old Capital, Mrs. Parks-Soberanis said that it was a joint endeavor initiated by her and her brother, Eric. When completed, she told us it will stand as a small shopping complex with twelve units. While the lower floors will be reserved for businesses, she stated that she and her family will dwell on the uppermost floor.

The contractor that she has hired to direct the construction of the structure is Mr. David Betancourt, 71, who deals with the technical know-how. He is a veteran contractor who has been at the helm of numerous construction sites in the US. The building, which is sits at 47A Vernon Street, will be known as Parks Shopping Plaza.

Mrs. Parks-Soberanis mentioned that she decided to create the plaza because initially the land was purchased in 1979 from Mr. Leigh Richardson, and after roughly 34 years of it being vacant, she and her brother decided to make much-delayed use of it. She pointed out that they (she and her brother) have been working on erecting the building for a period of 17 years, and although finances were hard to come by at times, they were determined to get it done.

Instead of surrendering to financial woes, she emphasized that they gathered courage and made up their minds, believing that if other people could do it, they could too. She stated that with the help of DFC, they are now entering the final stage of construction.

The contractor said that the building is approximately 70% completed and they expect the works to culminate by the end of the year.

This major investment tallies close to $1.3M, after factoring in financing and cost of labor and raw materials. Mrs. Parks-Soberanis told us that they had difficulty procuring a loan because of their age, so they had to invite her son, Wole, to co-sign their loan agreement.

She said that she hopes to be around a neighborhood where they can make a difference in the community and change a bit of the bad rap that the area is known for. Amandala understands that there are presently 20 men from the community who are employed by the contractor to work on the construction of the facility.

The optimistic investor said that she also wishes to see a restaurant become part of the shopping plaza, because there are no restaurants in the immediate vicinity.

The plaza will cater to small business initiatives, primarily on the ground floor, while the second floor is modeled for an office setting.

Her message to other business-minded individuals is to “be strong and start saving; don’t be afraid to talk to people and ask for ideas, to try and do things.” She said, “If you have an idea, what can you lose? Try…”

For persons who might have an interest in renting any part of the building, she said that she can be contacted at her phone number 627-9059. Interested persons are also welcomed to go to the location and take a look, according to Parks. She said that she is pleased and optimistic, because she has already gotten favorable responses from prospective tenants.

Wole Parks, 31, the son of Lillette Parks-Soberanis, is also a much accomplished Belizean-American actor with several movie and TV show appearances under his belt. He starred in a movie called Premium Rush that was released last year, and is also a part of the cast of a show called Devious Maids, a comedy-drama series produced by ABC Studios, which just wrapped up its season finale. He said he’s also going to be on the show in the new season, starting next January. Apart from those, he was also featured in the popular TV series NCIS, which will be premiering on October 7th.

Parks said that the role of an actor for him in the US is, in his view, a reward for years of hard work. He said that he came to Belize on a short 1-week visit to spend time with his family. For those who would like to pursue a similar career, Parks said that it takes hard work; and added that “education is key; that is the key to achieve your dreams, especially in today’s economy.”