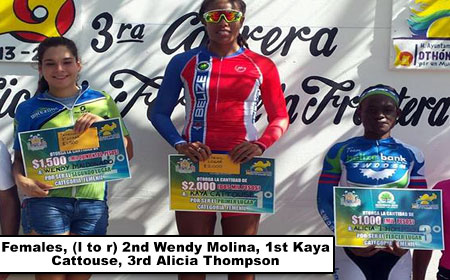 Belizeans placed top-three in the Junior category. Team Marie Sharp took the first and third spots on the podium, with Darien Anderson winning and Patrick Williams in third position. Smart’s Kaydine Pinelo was second. The trio got away from the peloton, and were able to hold them off until the final lap.

In the Female race, eleven cyclists lined up – three of which were Belizeans. National Road Champion, Kaya Cattouse of the C-Ray Cycling Club, was in a break-away from the first lap with Mexican Wendy Maldonado Molina. After the 26-mile race, including 10 laps on the circuit, Cattouse finished solo. Molina finished in second place, and Belizean Alicia Thompson of Belize Bank Swoosh rounded out the top three.

National Road Champion, Giovanni Lovell of Digicell won the 24-lap Elite race by out-sprinting a well-known “fast cat,” Donizetti Vasquez of Merida. These two, along with Smart’s Oscar Quiroz, came to the finish line together. Usually, when racing abroad, Belizeans race for team and not country; but in this instance, the two Belizeans worked together and managed to come out on top. 1st – Giovanni Lovell; 2nd Donizetti Vasquez; 3rd Oscar Quiroz; 4th Tarique Flowers (Benny’s Megabytes); and 5th Gustavo Giron.

(Sports Ed. Note: Kaya said she would be travelling to Merida this coming weekend to ride in the “Sadasi Classica.” Right now, she is “3 for 3” on the international scene in Mexico, having won “La Vuelta Yucatan – Merida” in August of this year, “La Vuelta Mayakoba – Playa del Carmen” in October, and now the “Carrera de la Frontera Sur – Chetumal,” also in October. Congrats to all our Belizean cyclists on a great performance! Right on!)