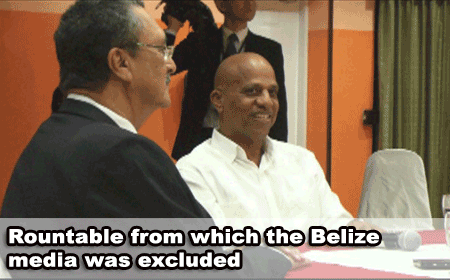 BELIZE CITY, Wed. Mar. 16, 2016–If you’ve noticed a wide disparity in the coverage by the Belizean media versus the Taiwanese media on the visit of Taiwan president Ma Ying-jeou, the highest-ranking official outside CARICOM to have paid a visit to Belize in the recent past, that is because the Belizean media was persistently denied proper access to cover the event.

If we wish to be precise, we would have to say that the Belizean media was heavily disrespected, but it was not clear who exactly was handing down the directives. One media colleague said he was told that protocols were being passed down from the Ministry of Foreign Affairs.

The Government Press Office officials escorting the Belizean press seemed just as surprised about the restrictions and a reporter from the Guardian, the ruling UDP’s newspaper, boycotted the evening photo shoot in protest when he heard that a photo was all that he would be allowed to take at the Radisson.

When Ma arrived in Belize on Wednesday morning, members of the Belizean press traveled to the Philip Goldson International Airport to cover the event. They were restricted to an area, cordoned off near the arrival lounge, but left in the hot sun, where the best coverage they could muster up was interviews with Taiwanese living in Belize.

Meanwhile, the media contingent that traveled to Belize from Taiwan was allowed full access to the VIP lounge, where Ma and his contingent were welcomed.

“When the president went up into the VIP area, I was then told that I couldn’t leave the cordon until the president had completely exited the airport. Once again, we, the local press, were not allowed near the VIP room, but I noticed that the Taiwanese press could come and go as they pleased. I don’t know what special arrangement was made for them,” a media colleague who works for a TV station recounted to our newspaper.

“The president came and greeted his people. I don’t think he was allowed to say anything to our [Belizean] press. The Taiwan press was inside the VIP area. A welcome ceremony was planned, and nobody told the Belizean press that we could go in and cover it. We were there in the hot sun for more than a half-hour. We settled for interviews with local Taiwanese who were there to greet the president,” said Aaron Humes, who was covering the event for KREM TV.

The Belizean press received no formal notification from the Government of Belize until the previous day that Ma was coming to Belize. Amandala had come across a foreign report some weeks ago and we reported on the story. In our midweek edition, we also carried a follow-up story, based on information kindly supplied to us by the Embassy of Taiwan in Belize.

Advance official information on Ma’s visit was lacking. Humes said that the state visit should have been more widely publicized, but he did not see the Ministry of Foreign Affairs making an effort to reach out to Belizean media to brief them on the visit.

Ma’s visit was a big deal for another reason—because three other CARICOM prime ministers traveled to Belize to meet with him for a roundtable discussion.

Ma first sat with these political leaders at a luncheon hosted by Governor-General Sir Colville Young at the Biltmore. Amandala was the only Belizean media present to cover the luncheon, and even though the Taiwan press was allowed to freely set up their cameras and prepare for the arrival of the officials, our newspaper was told that we would have had to leave the room until all the officials were settled at their dinner tables. We didn’t see that any such attempt was made to remove the Taiwan press.

We were told that the security officials from Taiwan were asking questions about our presence at the event, since they had not seen us at the airport. Eventually, after being subjected to questions and a bag search, we were allowed to remain in the room.

The Belizean media corps became irate on Wednesday night when they made their way up to the 5th floor of the Radisson, escorted by the Press Office, to a 6:30 p.m. appointment to attend the roundtable. We were told that the event would last 30 minutes.

When we were in the corridor, anxious to make our way to the roundtable venue to witness the dialogue between the leaders of CARICOM and Taiwan—where the Taiwan press had already been present—we were told that we would only be allowed to go in, take photos and video shots, and would immediately have to leave the room.

The media was stunned and obviously tempted to leave the building, but decided to oblige in the hope that an accommodation would be worked out. None was.

When we returned to the first floor lobby, we met our despondent media colleagues complaining about all that had transpired during the course of the day—and what clearly was discrimination against Belizean journalists in the coverage of a very important state visit.

Amandala gave its account to Love News, but today, the reporter who interviewed us had second thoughts about running the story. We asked our colleague at 7News if they would report on the treatment of the Belizean media, but it appeared that they, too, opted not to.

Humes reported on the matter for KREM News, chronicling the mistreatment of the Belizean media which occurred during the course of Wednesday.

“It won’t be the first or last time that a state visit is held and there are even more important dignitaries that will decide to come to Belize in the future, and I don’t think we want a repeat of this,” Humes said.

He underscored the need for more information to the press on the protocols to be observed, and a briefing on what they will be allowed to cover, so that the media can properly plan its coverage.

We note that although the Belizean media was not granted access to speak with the visiting leaders, there are online news reports from the foreign press which prove that they have had wider access and latitude to report on the proceedings of the meetings, including last night’s roundtable from which the Belizean media was ejected after a very brief photo shoot.
We note that while the journalists from the Belize media houses were being categorized as “local media,” we had to make the point that journalists here should properly be called “Belizean journalists”—just as artists of Belizean heritage are properly called Belizean artists—not local artists.